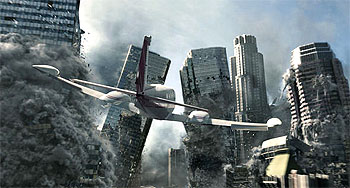 From 2012 director Roland Emmerich, on whether real life slows down his moviemaking:

If I cannot destroy a big high-rise anymore, because terrorists blew up two of the most famous ones, the twin towers, what does this say about our world?

Quite so.  If you can’t cinematically destroy New York and Los Angeles, then the terrorists have won.  Still, apparently there are limits.  Emmerich also reports that he avoided destroying Mecca in 2012 because his cowriter told him, “I’m not writing this to get a fatwa on my head.”

As an aside, I was quite disappointed in Emmerich’s last big disaster flick, The Day After Tomorrow.  Not for all the usual reasons, though.  There’s a book by Allan Folsom also called The Day After Tomorrow, and I was hoping that it was the inspiration for the film.  It was quite a terrible book, but after 600 pages of terribleness its final sentence is one of the finest in popular literature: “The severed, deep-frozen head of Adolph Hitler.”  How could you not make that into a movie?  But he didn’t.  Instead, it was just another ice age.