Matt Yglesias echoes a thought that’s been bouncing around in my head lately too: sometimes you need to pick a fight even though you know you can’t win.  Big ticket items like healthcare and climate change are bad candidates for that kind of thing, since a public fight with Congress might sink the whole thing.  But:

Financial regulation, it seems to me, would be that issue. In broad terms, the idea of regulating big banks is popular. And substantively speaking, a weak bill that’s full of loopholes would genuinely do very little good. We’re not in imminent danger of a bubble/crash replay but if we do something called “financial regulatory reform” we’re unlikely to do it again until there is a new panic. So there’s a strong case for coming out swinging against denouncing 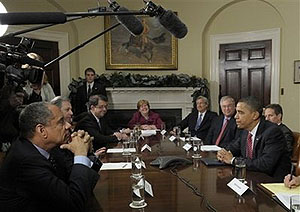 a too-weak bill as a sham and drawing some bright lines. If it doesn’t happen, I’ll do some Taibbi-style denunciations of Geithner & Rahm.

I agree, but I’d spin it a little differently.  Healthcare is an example of a standard issue major bill: it has lots of moving parts that all interlock, and the whole thing is a delicate balance designed to hold together just long enough to get 60 votes.  Screw with one piece and the whole edifice might come crashing to the ground.

But I think financial reform is different.  You can do it in lots of little pieces if you want, and taking a populist stand on one piece doesn’t necessarily endanger everything else.  So why not do it?  Why not pick a signature issue or two and really hammer away?  Make a few fire-breathing speeches about how you agree with Alistair Darling about taxing banks that hand out huge bonuses and will be sending legislation to Congress to make that happen.  It’ll probably fail, but at least it moves the conversation forward and gets the public engaged.  The fact that you fought the good fight won’t really hurt you (the nation’s bankers obviously don’t think much of you already), and far from sinking the whole reform effort, it might actually help keep the rest of the bill(s) from getting watered down even more.  A couple million postcards has that effect sometimes.

Of course, this all depends on what Obama really thinks of financial reform in the first place, and that’s a bit of mystery.  It would be nice to get a bit of a hint, though.