I missed this when it was first reported a few days ago, but it’s genuinely interesting news from the Rasmussen polling folks:

The pollster’s newest venture, Pulse Opinion Research, will allow anyone to commission a scientific, nationwide poll for the price of an IKEA sofa. Have a long-lasting feud about what America really thinks about a topic? Settle it for $600.

“Soon, anyone can go to the [Pulse] website, type in their credit card number, and run any poll that they wanted, with any language that they want,” said Rasmussen. “In effect, you will be able to do your own 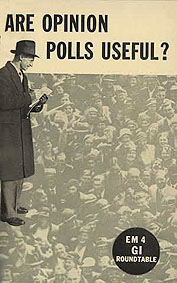 poll, and Rasmussen will provide the platform to ensure that the polling includes a representative national sample.”

….The birth of Pulse has roots in frequent requests for Rasmussen to do commissioned polling. Rasmussen Reports has historically turned down outside clients in order to preserve its independence. However, to capitalize on demand, Rasmussen decided to license his polling methodology to a separate firm, Pulse Opinion Research, which plans to launch its online services sometime in February.

The interesting part of this is the potential for quick, inexpensive polling on unusual topics. Want to find out whether a bold liberal pitch persuades more Americans to support healthcare reform than a more centrist appeal? Commission a couple of quick polls with your own pet ideas and find out.

And the dark side?1 Well, if I’m rich enough to afford it, I could commission a dozen polls on the same subject and release only the one with the results most favorable to my cause. Even if the polls themselves are honestly done, you’re almost certain to get a swing of ten points or so just by random chance, and if you manipulate a few other factors you can probably do even better. The opportunities for mischief are legion.

On the flip side, the opportunities for swallowing your own spin are also legion once you head down that path. But I doubt that will stop many people. A new era in polling is upon us, folks.

1One of them anyway. The other dark side is that this becomes a huge fad and we are all bombarded by robopolling calls on a daily basis. Soon we get so sick of it that no one will pick up the phone to talk to a pollster at all, and the entire industry is destroyed. That actually might not be so bad. Unfortunately, I don’t suppose it’s likely to happen.