The chart below, from Gallup, shows that public recognition of the seriousness of global warming has taken a steep hit over the past two years. This comes via Aaron Wiener, who believes the most obvious explanation for the shift is the growing politicization of climate change. “What was once a broad moral and scientific issue is now a centerpiece of the Democrats’ legislative agenda. The percentage of Americans expressing a belief in man-made climate change now correlates loosely with the level of support for the president, while the percentage expressing skepticism is in line with opposition to Democrats in Washington.”

True enough, though I’d say that the recent failure of Copenhagen and the concerted disinformation campaign surrounding “Climategate” probably played a role in the latest numbers. Whatever the reason, though, the effects have been devastating. It’s one thing to acknowledge climate change but to argue over its likely impact. That would lead politicians to accept cheap, small-bore measure to address warming but to reject bigger, more expensive ones.

But that’s not what’s happened. The Republican Party has largely decided that climate change simply doesn’t exist. It’s a hoax. And that leads them to oppose everything, even programs that have light footprints, don’t cost a lot of money, and don’t require massive regulation. After all, why should they support them if the problem they address literally doesn’t exist?

This is why so many environmentalists have switched gears recently, suggesting that climate change action should be disguised as energy research, national security programs, or competition with China for market share in windmills and solar panels. And maybe that will work for a while. But just saying something doesn’t exist doesn’t make it so. Eventually even the GOP is going to have to acknowledge this. 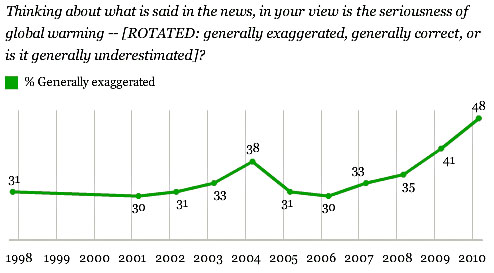