I got an email a few days ago asking whether the Medicaid expansion included in the healthcare reform bill would blow up state Medicaid budgets. I answered it and then forgot about it. Or I would have, anyway, except that we have an election for governor this year in California and Silicon Valley zillionaire Steve Poizner keeps running ads on my TV accusing Silicon Valley zillionaire Meg Whitman of, somehow, supporting Obamacare, which will blow up the state budget. 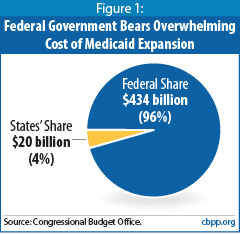 Poizner’s attack doesn’t even make sense — it’s just another round of these two moderate Republicans denouncing each other for being too liberal — but still: will Obamacare blow up state budgets? Basically, the answer is no:

So it won’t cost states an extra dime through 2016, by which time our recession will presumably be over, and even after that states will only pay for a tiny fraction of the increased costs. As CBPP points out, states will pay about 4% of the total costs of Medicaid expansion over the next ten years. This represents an increase in overall state Medicaid spending of slightly over 1%.

Put another way, that $20 billion in state spending will insure an additional 16 million people, which works out to a cost per person of $125 per year over the next decade.  That’s a pretty good deal. And not exactly fiscal Armageddon.