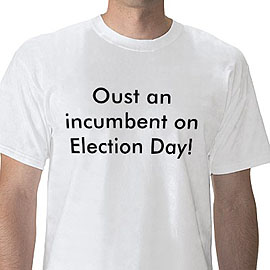 Via James Joyner, Republican pollster Glen Bolger thinks the “anti-incumbent” hype is overblown. The real story, he says, is that candidates got punished on both sides of the aisle for not toeing the party line:

Senator Specter’s loss was actually a double defeat. Because he voted for the stimulus package, he baited Pat Toomey into switching from the Governor’s race to the Senate race. Specter’s poll numbers in a GOP primary were far too weak to win a primary – he choose to switch parties rather than retire. However, his previous support for George W. Bush and other Republicans (and GOP policies) meant Democratic voters couldn’t trust him. Specter’s once legendary ability to both annoy and please conservatives, moderates, and liberals caught up to him in this time of hyper polarization.

Lincoln is facing the same traumas from the left — she is perceived by many unions and liberals as not supportive enough of their agenda, and thus not worthy of renomination.

An incumbent all but in name, Charlie Crist should be in that same body count of politicians who “lost” their party’s nomination for not being orthodox enough. His support for the stimulus package made him persona non grata among a GOP primary electorate looking for someone to fight against the framework of bigger government spending more money.

Alan Mollohan is the exception to this trend, says Bolger, and I think I’d add Bob Bennett to that list. Sponsoring the Wyden-Bennett healthcare bill, which was never in play and never went anywhere, doesn’t really seem like it would normally count for much, and lots of Republicans ended up voting for TARP. Aside from that, Bennett toed the GOP line pretty strongly and always got high marks from conservative advocacy groups. So I’d have to classify his loss as due at least partly to anti-incumbent fervor.

Still, that’s pretty thin to hang a trend on. One of Steve Benen’s readers makes a similar argument here and Nick Baumann has some related thoughts here. Overall, I’d say the press should show a little caution on this. A bunch of incumbents will surely lose in November because a bunch of incumbents always lose in midterm elections when the economy is lousy, but beyond that it’s not clear that anything all that unusual happened yesterday. Tea parties make good copy, but that’s no excuse for swallowing their PR whole. From where I sit, it looks like the anti-incumbent tide is being pretty seriously overplayed.