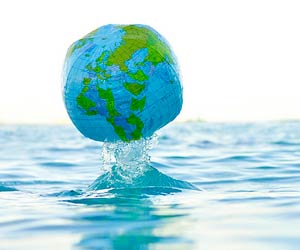 In yet another case of politicians forgetting to turn off a microphone, it turns out that some of the private negotiations on the final day of the Copenhagen summit were accidentally recorded. All the big guns were there: Barack Obama, German chancellor Angela Merkel, French president

Nicolas Sarkozy, Indian Prime Minister Manmohan Singh, and a Chinese negotiator, He Yafei. From a story in last week’s issue of Der Spiegel, here’s part of the conversation:

“The IPCC report comes to 2 degrees,” said Merkel. “And it also says that we have to reduce (carbon dioxide emissions) by 50 percent.”

She wanted to make it clear to Chinese delegation leader He Yafei and Indian Prime Minister Singh that they also had to do their part to achieve the 2-degree target. “Let us suppose there is a 100 percent reduction — (e.g.) no CO2 in the developed countries anymore,” even then you would have to “reduce carbon emissions in the developing countries” in order to reach the 2-degree goal, the visibly irritated chancellor said. “That is the truth.”

When the Indian leader absolutely refused to accept any concrete targets in the Copenhagen Protocol, Merkel dropped the diplomatic etiquette. “But then you do not want legally binding!” she yelled at the leader of a nation with over a billion people. Singh literally shouted back: “That’s not fair!” His Chinese colleague, Deputy Foreign Minister He Yafei, added calmly and in polished English: “The current formulation would not be agreed.”

And here, via Google Translate, is the rest of the conversation in this week’s issue:

Then Sarkozy reacted sharply and accused China lack of will for climate protection. “In aller Freundschaft” and “with all due respect to China,” the West has committed to cut greenhouse gases 80 percent. “And in return, China, which will soon be the largest economy in the world says to the world: engagement apply to you, but not for us.” Then Sarkozy, added: “That is not acceptable!” This is about the essentials. “We must respond to this hypocrisy.”….[He Yafei responded]: “I heard President Sarkozy to talk about hypocrisy. I avoid such concepts.”

In any case, this recording suggests that the initial reports were more or less right: the Chinese and the Indians were just flatly not willing to make any commitments. As a result, according to the story from last week, Merkel has pretty much given up on climate change:

The collapse of the Copenhagen summit has permanently shaken up Merkel. She […] left Denmark feeling frustrated. She had rarely experienced such a humiliation. She won’t let that happen to her again, she has told herself ever since. Irregularities committed by the Intergovernmental Panel on Climate Change (IPCC) also annoyed the chancellor. Although these errors have not altered the urgent and key messages, she has angrily said among her close advisers that the IPCC’s poor communication has made it more difficult to promote climate protection.

Yeesh. Things are really grim on the climate front all over. (Via David Roberts on Twitter.)