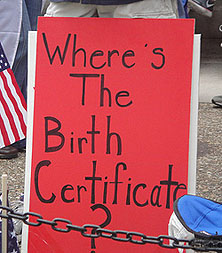 Jonah Goldberg thinks the truther movement is every bit as insidious as the birther movement. Responding to a post by Jon Chait suggesting that there really is a difference, here’s his case:

Forgetting that a Truther — Van Jones — had a significant foothold within the White House itself, this really isn’t that great an argument. I’m willing to concede, at least for the sake of argument, that the Birthers have more prominence in the GOP than Truthers had in the Democratic Party. But let’s not pretend that truther-style nuttery wasn’t indulged by the Democrats (nor forget that Trutherism is a vastly more evil and pernicious worldview than birtherism). Michael Moore, who sat in Jimmy Carter’s skybox at the Democratic Convention, was embraced by the leadership of the Democratic Party. Moore believed 9/11 was an “inside job.” Cynthia McKinney first broached the “inside job” thesis while she was still a Democratic congresswoman.

This kind of argument comes up all the time, but it misses the point. There are whackjobs and bomb throwers willing to embrace conspiracy theories on both sides. But there’s a profound difference here between right and left: on the left it’s mostly just whackjobs and bomb throwers who buy into the truther story. Goldberg can only name one actual Democratic politician who’s a truther, and guess what? She lost her seat in Congress almost immediately after her statements about 9/11 — and when she returned in 2005 the Democratic leadership didn’t exactly welcome her with open arms. As for Van Jones, he signed a truther petition years ago, disavowed it completely, and was nonetheless bounced from his midlevel job coordinating green initiatives.

Compare that to the birthers. It’s bad enough that prominent conservative pundits like Rush Limbaugh, Liz Cheney, and Sean Hannity have flirted with the birthers. But what’s worse is that birtherism seems to be a perfectly acceptable belief among actual Republican leaders. Sarah Palin thinks it’s a question well worth asking. Roy Blunt isn’t sure Obama is a citizen. Dick Shelby thinks it’s curious that we haven’t seen Obama’s birth certificate. Michele Bachmann recently showed up at a tea party event and palled around with birther queen Orly Taitz. My congressman, John Campbell, said that Obama was a citizen “as far as I know” and then, with a wink and a nod, cosponsored a bill requiring presidential candidates to submit a birth certificate. The bill currently has 13 Republican cosponsors.

This is just a huge difference. With the ambiguous exception of McKinney, who’s not exactly a big wheel in Democratic politics, there’s just no one of any stature on the liberal/Democratic side of the aisle who buys into trutherism. If Paul Krugman and E.J. Dionne and Rachel Maddow took it up, that would be one thing. If Dick Durbin and John Conyers and George Miller and Jerry Nadler were truthers, that would be another. But they aren’t. They don’t flirt with it, they don’t make jokes about it, and they don’t pander to their lefty base by delivering clever applause lines about it. But where the birthers are concerned, Republican politicians and significant conservative thought leaders do. That’s the difference.