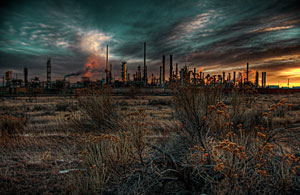 I think climate change legislation is dead. There’s not enough time for a bill to go through the committee process, get passed by the Senate, sent to conference, amended, and then passed by the full Congress before the midterms, and after the midterms Democrats will probably be reduced to 53 or 54 members in the Senate. Some of them won’t vote for a climate bill, which means you’d need to find ten or a dozen Republicans to break a filibuster, and that’s just not gonna happen.

There is still a narrow (and, yes, improbable) path to passage. Here’s how it goes: Kerry and Lieberman introduce their bill on Wed., looking roughly like it looks now, with drilling provisions intact like Lieberman wants. It fizzles, lost amidst Elena Kagan, tornadoes, and Gordon Brown. After a couple weeks, buoyed by public opinion that is clearly turning against drilling and in favor of clean energy, Reid takes control of the process, strips drilling out, boosts the energy efficiency and renewable energy provisions, and gives the bill a big, public push.

For this to happen requires two things, which also require each other. First, public opinion has to keep moving and getting louder. There has to be a sense of urgency behind passing a bill….But for public opinion to crystallize and become a serious force, it must be echoed, amplified, and directed by the only politician that most Americans still trust: Barack Obama. I’ve said this before and it remains true: the only way this thing gets done is if Obama lays himself on the line for it. (It would also help, incidentally, if the left pushed to mobilize the public behind a bill, though at this point the left seems content just bitching and moaning about it, as they’ve done throughout the entire process.)

Unfortunately, I don’t think there’s any chance of Reid taking over the bill after only a few weeks. He’s pretty deferential to the committee process. And even if he did, the words “Harry Reid” and “big public push” don’t often show up in the same sentence. Reid is an inside guy, not an outside guy.

As for Obama, who knows? But my take is pretty simple: if there’s one thing that Obama has demonstrated for us over and over again, it’s the fact that he’s pretty sensitive to the political tea leaves. He doesn’t tilt at windmills, and he certainly doesn’t ask members of his own party to take seat-threatening risks shortly before an election in service of a lost cause. It’s just not his style. So I’d be pretty shocked if made the kind of public push Dave wants, and I’d be surprised if it worked even if he did.

I’m not sure what the next step is. Assuming that Dems still control both houses of Congress next year, we can try again. But the left’s bitching and moaning has mostly been a reaction to the relentless watering down of the current climate bills, and if you think this year’s bills are watered down, just wait until you see what a Congress with a hair-thin Democratic majority produces. The left will not be pleased.

If I had to guess, I’d say that cap-and-trade (or a carbon tax) is dead for the near future, and our best bet is to regroup and attempt to pass a bill without it. There are actually plenty of things we could do to reduce carbon emissions in the short term that don’t involve carbon pricing (in fact, carbon pricing in the near term would have only a small impact even if we put it in place immediately), and maybe we’re best off focusing on that stuff for now and waiting for a better opportunity to get a carbon fee established. Opinions?