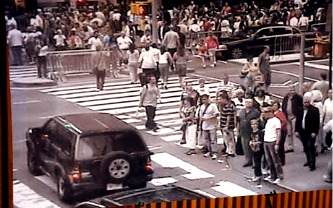 One of my running jokes about 24 is that it makes me thankful on a weekly basis that real terrorists are nowhere near as smart as TV terrorists. We’d all be dead a dozen times over if they were.

That’s just a joke, but there’s a serious question underneath: why is it that nearly all the terrorist attacks on U.S. soil over the past few years have been so laughably incompetent? Shoe bombs, underwear bombs, blowtorches, moronic plots, and now a propane bomb that wouldn’t have caused very much damage even if it had gone off. David Corn asked a few experts about this and here’s his conclusion:

In other words, terrorist outfits organize two types of operations: those they meticulously plan and to which they devote their best resources, and those they take a flyer on. The recent miscues have been the latter. And those are likely to continue—with the possibility of success. What’s perhaps harder to know is whether al Qaeda is in the position to mount the more serious and extensive operations, which demand competent, intelligent, and well-trained operatives.

OK. But this still leaves me scratching my head a little bit. Terrorist groups have been building increasingly deadly explosives for decades now, a story told in some detail by Mike Davis in Buda’s Wagon: A Brief History of the Car Bomb. It’s not a trivial task, but it’s not rocket science either. Somehow you’d think that even lone wolves working for newbie groups like the Taliban would be able to pull off an operation that works. Not a massive, state-of-the-art car bomb, but still something that detonates.

But apparently not. At least, not yet.

UPDATE: Here’s another theory from Steve Coll: “When a singleton of Shahzad’s profile — especially a U.S. citizen — turns up in a place like Peshawar, local jihadi groups are much more likely to assess him as a probable U.S. spy than as a genuine volunteer. At best, the jihadi groups might conclude that a particular U.S.-originated individual’s case is uncertain. They might then encourage the person to go home and carry out an attack — without giving him any training or access to higher-up specialists that might compromise their local operations. They would see such a U.S.-based volunteer as a “freebie,” the former officer said — if he returns home to attack, great, but if he merely goes off to report back to his C.I.A. case officer, no harm done.”