This kind of stuff has become so commonplace in the post-9/11 world that we hardly even notice it anymore, but the case of Yahya Wehelie is really just outrageous beyond belief. Keep in mind as you read that he’s a U.S. citizen born and raised in Virginia:

For six weeks, Mr. Wehelie has been in limbo in [Cairo]. He and his parents say he has no radical views, despises Al Qaeda and merely wants to get home to complete his education and get a job. But after many hours 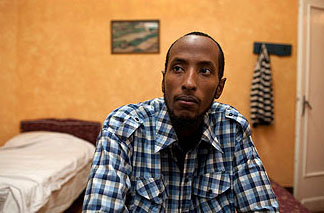 of questioning by F.B.I. agents, he remains on the no-fly list. When he offered to fly home handcuffed and flanked by air marshals, Mr. Wehelie said, F.B.I. agents turned him down.

….“For many of these Americans, placement on the no-fly list effectively amounts to banishment from their country,” said Ben Wizner, a senior staff attorney with the A.C.L.U. He called such treatment “both unfair and unconstitutional.” An F.B.I. spokesman, Michael P. Kortan, said that as a matter of policy, the bureau did not comment on who was on a watch list. But he said the recent plots showed the need “to remain vigilant and thoroughly investigate every lead.”

“In conducting such investigations,” Mr. Kortan said, “the F.B.I. is always careful to protect the civil rights and privacy concerns of all Americans, including individuals in minority and ethnic communities.”

….The no-fly list gives the American authorities greater leverage in assessing travelers who are under suspicion, because to reverse the flying ban many are willing to undergo hours of questioning.

But sometimes the questioning concludes neither with criminal charges nor with permission to fly. The Transportation Security Administration has a procedure allowing people to challenge their watch list status in cases of mistaken identity or name mix-up, but Mr. Wehelie does not fit those categories.

This is an abomination, pure and simple. There’s not the slightest question that it would be possible to allow Wehelie to fly home safely even if he were Osama bin Laden’s minister of defense. The government of the United States should be allowed to search him and his luggage with abandon if they have reason to suspect him of illegal activity, and they have every right to question him for the same reason. But the right to keep him from flying home? No. That doesn’t just skirt the line of what the American government should be allowed to do, it blows right by it and makes a mockery of the constitution and every smarmy bureaucrat who pretends to support it while snickering behind their hands about “carefully protecting the civil rights and privacy concerns of all Americans.” How on earth can Barack Obama stand by and continue to allow stuff like this to happen?