I’ll confess to some lingering unease over the American ritual of forcing CEOs to grovel in front of grandstanding congressional committees whenever their companies have done something wrong, but in the case of BP’s Tony Hayward 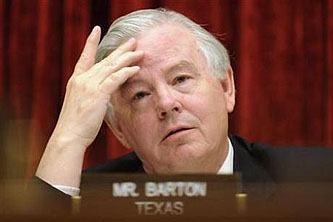 In his opening remarks, Representative Joe Barton, a Texas Republican, apologized to Mr. Hayward….Mr. Barton called the president’s meeting with the oil company “a tragedy” and “a shakedown.”

….In his opening remarks, Representative John Sullivan….charged that the Obama administration is “focused on the politics of putting the oil and gas industry out of business.”

….In his opening remarks, Representative Parker Griffith, an Alabama Republican said that “if we’re going to talk about the environment,” he’d “like to remind the committee that the greatest environmental disaster in America has been cigarettes.” That means, he said, that the spill is “not going to be the worst thing that’s ever happened to America.”

Georgia Republican Representative Tom Price, chairman of the Republican Study Committee, [] said BP’s willingness to go along with the White House’s new fund suggests that the Obama administration is “hard at work exerting its brand of Chicago-style shakedown politics.”

….And former Texas Republican Representative Dick Armey, a leading voice in the conservative Tea Party movement, told a Christian Science Monitor breakfast this week that Obama lacks the constitutional authority to set up such a fund.

….In addition, conservative Republican Representative Michele Bachmann of Minnesota was quoted as telling the Heritage Foundation think tank on Tuesday that the escrow account was a “redistribution-of-wealth fund.”

This is great! And I really think the White House should have held off on criticizing Smokey Joe for his “shakedown” statement. All it does is put the GOP on alert. The better strategy is to stay mum, lull Republicans into thinking they can get away with this stuff, and then wait for their remarks to go completely over the top. It’ll happen. In fact, if Dems play this right it won’t take long before the entire Republican Party is demanding that the government pay BP to replace the Deepwater Horizon platform that failed because of thuggish, business-hating Democratic energy policies. Or something.

So stay cool, folks. All Republicans need is a little nudge. Tea party delirium will take care of the rest.