The most common reaction to the WikiLeaks release of 92,000 classified cables and other documents from Afghanistan has been a collective yawn: they don’t really tell us anything new, so it’s not much of a story. Glenn Greenwald, among others, has been pushing back against this. Here’s a sampling of his recent Twitter posts:

So this is all boring old news that tells us nothing – or WikiLeaks has Endangered Us All & the source should be killed. Can someone choose

These are the kinds of stories the WikiLeaks documents enable – decide for yourself if they’re worthwhile: http://is.gd/dLcp5

James Fallows on the “nothing-new-here” dismissals of WikiLeaks from war supporters: http://is.gd/dMn1I

When I first read the Guardian and New York Times writeups about the WikiLeaks release, I mostly yawned too. But I pretty quickly felt kind of guilty about that. Not because I was wrong in a technical sense — most of the WikiLeaks stuff really has been common knowledge for a long time — but because everyone was saying it. And as my colleague David Corn points out, that really doesn’t seem right. Even if the news is old, 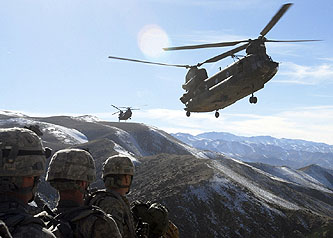 the leaked documents do provide a different look at familiar events and are likely to capture public attention in a way that the original news reports didn’t. That’s pretty worthwhile. Plus, as Glenn points out in the fourth tweet above, some of the leaked documents really do seem to be newsworthy in their own right:

Buried among the 92,000 classified documents released Sunday by WikiLeaks is some intriguing evidence that the U.S. military in Afghanistan has adopted a PR strategy that got it into trouble in Iraq: paying local media outlets to run friendly stories.

….In one of the WikiLeaks documents, a PRT [provincial reconstruction team] member reports delivering “12 hours of PSYOP Radio Content Programming” to two radio stations in the province of Ghazni in 2008, and paying one of them “$3,900 for Radio Content Programming air time for the month of October”….Two other messages seem to show U.S. soldiers referring to local Afghan media as extensions of their own units rather than independent reporters.

I don’t have a lot more to add to this. I guess this is just sort of a weasely semi-apology for semi-dismissing the WikiLeaks documents. I really hate the idea of enabling a conventional wisdom that suggests there’s nothing to worry our little heads over here. The WikiLeaks dump isn’t Pentagon Papers II because it doesn’t show the same level of official lying that the original Pentagon Papers did, but it’s still important because it helps focus our attention on something worth focusing on. And God knows that after two weeks of the New Black Panthers and Shirley Sherrod and the Ground Zero mosque, we could stand to shift our attention to something a wee bit more worthwhile.