Keith Humphreys says that dealing with the DMV is one of the most common ways that Americans interact with their government, and the fact that DMV performance is generally horrible makes people hate the entire enterprise of representative democracy. “DMVs undermine our faith that the public sector can do anything right or that it even cares if it does,” he writes, “and that undermines a basis for a democratic society.” Even granted that Keith was having a bad day (at the DMV, in case that’s not clear), Mark Kleiman has a question: 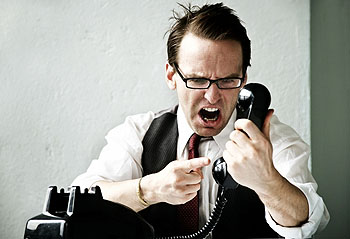 Excellent question! Here’s my best guess at an answer. People complain about customer service from big, faceless corporations all the time. But when they do, they complain about a specific corporation: “Time-Warner sucks,” “I hate Verizon,” “I’m never flying Delta again,” etc. In their minds, these are separate companies that have performed badly, but they don’t necessarily reflect badly on the entire enterprise of capitalism. Besides, in many of these cases there’s at least theoretically the possibility of taking your business elsewhere.

In the case of governments, people don’t distinguish as well. If they have run-ins with the IRS (federal government), the DMV (state government), the zoning commission (city government), their trash pickup (county government), and the municipal water company (an independent agency), these are all “the gummint.” And, of course, in all these cases there’s not even a theoretical chance of dealing with anyone else. If you need a business license, the only place you can get it is the county clerk, and if their hours happen to be 9-5 on weekdays and they require you to show up in person and wait in a long line — well, that’s what you have to do.

But it’s still a bit of a quandary. If I had to guess, I’d say that the average joe actually gets more grief from dealing with big corporations (cell phone provider, cable company, airlines, etc.) than from all levels of government combined. Most of us, after all, don’t interact with the government all that much aside from mailing them checks now and again. What’s more, there are institutional reasons that explain lousy customer service in both cases — though, ironically, they’re mirror images: lack of competition in the case of government (so they don’t have a lot of incentive to improve) and too much competition in the case of corporations (which forces them to cut service to the bone in order to stay price competitive on their main products).

So which is worse? My mother was complaining last night about the LA Times’ inability to deliver her paper correctly. “How long has this been happening?” I asked. “About fifty years.” And recently it got even worse because they’ve installed a new payment system that’s shot full of bugs, leading to missed deliveries and bad billing. But then there’s my sister, who owns a condo and has spent the last several months fighting the County of Los Angeles, which recently decided to update its property records and determined that her garage (which is attached to the main building, not a separate structure) didn’t belong to her anymore and auctioned it off. That was after she’d called several times and was assured it was just a mistake and not to worry about it.1 So now her association has had to hire a lawyer of its own to straighten this out.

Which is worse? My sister’s problem is certainly more severe, though it will eventually get cleared up. My mother’s is merely annoying, but chances are her service from the Times will stay terrible forever. Take your pick.

1Quick hint for life improvement: whenever anyone tells you something is just a mistake and “not to worry about it,” start worrying. This is almost a certain sign that you should immediately panic and start burning up the telephone wires demanding a resolution in writing at the earliest possible time.