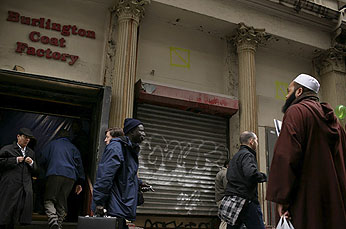 Conservative humorist/provocateur Greg Gutfeld has announced that he intends to build a gay bar next door to the planned Islamic center on Manhattan’s Park Place that’s become known as the Ground Zero mosque. “This is not a joke,” he says mockingly. “I’ve already spoken to a number of investors, who have pledged their support in this bipartisan bid for understanding and tolerance.” James Joyner calls it “an inspired idea” and Megan McArdle says:

Well, it’s a big country. There’s bound to be someone who will give it a try. But I doubt there are going to be any serious takers, and I’m willing to bet that mosques and churches all over Manhattan have long since reconciled themselves to being within a stone’s throw of all sorts of establishments they consider less than savory. They’ll take this in stride.

At the same time, we’re grownups around here, right? We do understand the difference between something that genuinely isn’t meant as a provocation and something that is, don’t we? The law might not take that into account, but as ordinary human beings surely we can. The campaign against the Park Place mosque has been a demagogic nightmare from the start, and I think it’s safe to say that a few years from now the conservative movement is not going to look back at this as one of their finest hours. After all, we’re supposed to be fighting violent Islamic radicals like Osama bin Laden, not helping their cause.

actor212: There’s already a bar next door. I think it’s called “Dakota North” or something like that. Anyway, my recollection is, it’s not exactly the, um, most hetero place in TriBeCa anyways. Hope Gutfeld’s got a marketing budget.

And from one of Andrew Sullivan’s readers:

You are aware that there is already a New York Dolls strip club on 55 Murray Street (which will be just around the corner from the Cordoba Institute)? So haven’t we already crossed the bridge of allowing Ground Zero ‘gentlemens’ entertainment? And if we’re OK with adult entertainment of the heterosexual variety we can’t then reject entertainment of the homosexual nature in the same area.

OK then. Glad we got that settled.