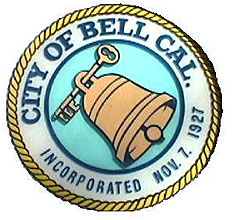 The city’s director of administrative services, Lourdes Garcia, was earning $422,707, and the director of general services, Eric Eggena, earned $421,402, officials said. Those amounts include salary, deferred compensation and some benefits, which city officials did not fully detail. In addition, Bell’s director of community services, Annette Peretz, earned $273,542, a deputy city engineer earned $247,573, the business development coordinator earned $295,627, a police captain earned $238,075 and a police lieutenant earned $229,992. Their names were not immediately released.

This was all in the midst of rising taxes because, you know, the city was hurting for cash. And what were all these high-paid geniuses doing? Check it out:

The small and cash-strapped city of Bell is on the hook for a $35-million bond debt that voters didn’t approve — and that the city can’t afford to pay off, The Times has learned.

The debt, which Bell took on three years ago to buy land near the 710 Freeway, is more than twice the size of Bell’s annual operating budget. Come November, the city could lose the land to foreclosure. The city’s hope to profit from the purchase fell apart in 2008 after city officials failed to conduct basic environmental reviews.

….In October 2007, East Yard Communities for Environmental Justice, a citizens group that tries to blunt the effect of industrial pollution on the 710 corridor, filed suit against the city and the railroad….In July 2008, Los Angeles County Superior Court Judge James C. Chalfant agreed; he scolded Bell officials for ignoring their obligations under the California Environmental Quality Act. “The whole idea of CEQA is that you are supposed to prepare your environmental review before you enter into the lease with the railroad,” the judge said. The law “is supposed to be followed for a project. They didn’t do anything.”

Nice work, overpaid officials! I know the DA is looking into whether the law was broken when the city council and the city managers all agreed to raise each other’s salaries to the moon, but if it turns out there’s no applicable law I’d be willing to just make one up.