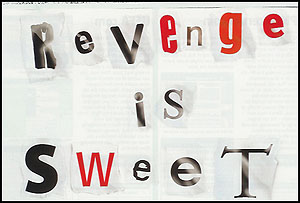 The Wall Street Journal reports on the tendency of TV writers to get revenge on their real-life enemies by eviscerating them on their shows:

After several seasons of disappointing reviews, writers on the USA network’s mystery series “Psych” decided to get revenge. They crafted an episode involving a psychotic killer doctor. The deranged murderer’s name? Ken Tucker, who in real life is the mild-mannered, 57-year-old TV critic for Entertainment Weekly magazine.

….When the lead detective wants to discuss a serious matter with his partner in the drama “Detroit 1-8-7,” which premieres on ABC Sept. 21, he will only talk via cellphone, even when the two men are in the same car or sitting together at a coffee shop. “That’s a reference to a passive-aggressive Hollywood producer who will go unnamed,” says executive producer Jason Richman, referring to a power player who goes to great lengths to avoid face-to-face confrontations.

Some gestures are more casual. Before he created “Mad Men,” Matthew Weiner worked as a writer on “The Sopranos,” where he put the name of a former employer who had wronged him on a gravestone in the background of a cemetery scene.

This is pretty disappointing. I think it would be kind of cool to be eviscerated on a TV show, and I figured my only real problem is that no one dislikes me quite enough to bother. I could always work on that, though. But why bother, if “evisceration” just means having one of my quirks silently mocked or my name showing up on a gravestone in the background of a single scene? Hell, without Tivo I might miss that it even happened. Is this really the best that TV writers can do?