In David Corn’s piece this morning, Rep. Bob Inglis told a story about meeting up with some constituents who earnestly regaled him about the sinister origins of the number on the back of your Social Security card. “That number indicates the bank that bought you when you were born based on a projection of your life’s earnings,” they told him.

To my disappointment, a Google search didn’t turn up much. However, I did run across a blog post that recounted a few interesting tidbits about Social Security numbers. Interesting, but not what I was looking for. 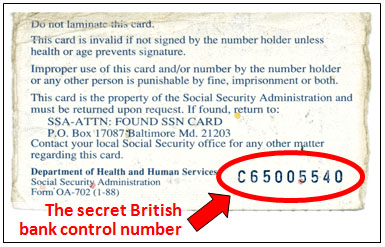 Pay dirt was in the comments. I figure we could all use a laugh now and then, so here it is: the meaning of the numbers. Enjoy.

F. Howles: Here’s one to research. What’s the red numbers on the back of a social security card for?

Captian Jack Sparrow: Does anyone know what those red numbers on the back are for. I am very curious as well.

freedomfighter: about that serial or whatever on the back…im researching it but from what I’ve gathered that is a bank routing number linking you as property of some royalty british bank.

golbguru: Do you have a reference for this statement: “but from what I’ve gathered that is a bank routing number linking you as property of some royalty british bank.” ? As far as I am concerned that’s total BS.

freedomfighter2: I’m actually looking for documentation but all I remember is hearing about it in some google video…not the most reassuring evidence, but for now until im disproven I suggest leaving it as an option…when i come across the video ill post it.

Puzzled: I’m still trying to find out more about the numbers on the back of Social Security cards. My friend’s card has red numbers. Mine are of another color and I don’t know why.

Puzzled: By the way, about that thing that you think is BS, with your SSN being tied to some royal british bank is in fact completely true. Your SSN is tied to Social Security Administration which is tied directly to the Federal Reserve System, which is privately owned by stock-holding banks, one of which is Barclay’s, a Royal Britich Bank, as well as several American banks, which are also British owned and controlled.

Beaver: I heard an urban legend that the red numbers on the back of the social security card are your EIN, employer ID number. If you’re just a regular John Doe citizen, you’re an employee of the US Corporation, and are in fact yourself a corporation. That’s why you use the number on the front, your employee ID number (SSN). Supposedly, if you have a replacement card issued to you, the number on the back will come in red ink, and you can use it to declare that you’re a soveriegn American and not a citizen OF the United States….If you use the number on the back, the “tracking number for blank cards” printed in red ink, you’re claiming ownership of the card and the chattel property it represents. You are the chattel property. If you don’t, they “own” you. You’re their chattel property, and you’re being used as collateral on the bankruptcy the US Govt. filed to the international banking houses back in the 1930’s, the time of the great depression.

ChelC: came upon this when someone referred me here:

They told me to enter the year of my birth, followed by the red number. Select Mutual Fund and Fund number. You will find out what yours is if you have one. So, if I was born in 76, I would enter 76xxxxxxxx.

Fed Up: I called Social Security headquarters asking about this. The representative had the following four answers: 1) “No idea, hold on.” 2) “Hold on, I have never heard of that.” 3) “I am still checking, I have never had this question before.” And finally 4) “It refers to when the card was issued. It is a reference number, having nothing to do with your SS #.”

RON: The # on the back of your ssn card is “Priority Exemption Acc. #” The letter represents the Federal Reserve Bank that hold the bond the 8 digits is the acc. #

chandra: Is there a way to research the federal reserve bank that corresponds with the letter???

a good samaritan: There’s ten bonds associated with one SSN at the Fed. The number on the back of the card is only one of ten numbers which identifies the bond it’s associated with. The bond, which is held by the Fed, has an account associated with it. This is the account talked about called “Private Exemption”. The only way to take control of these bonds/accounts is through the Depository Trust Company.

Strobel: Looking for more information on the red numbers on the back of the SS card. A guy I met told me he pays his monthly bills using that number. It is supposedly a bank routing number attached to the British bank some people here have mentioned. Does anyone have any more specifics on this?

No One: well to answer your questions about the red numbers on the back of your cards when i was working for the government i learned that during the great depression the government started investing in the world market in our names and using our ssn #’s so that if that ever happened again they could pay out the unemployed.

Falcon: So far in my research I have heard many different theories on how to go about capturing your STRAWMAN, charging up your treasury account, and discharging your debt. The problem is, they are all theories!

Please beware my friends of people who want to charge you money for this information. I paid out a pretty penny so far and the information I received is conflicting. I have some friends that are working with a “Patriot” who has gladdly accepted many thousands of dollars from them as a fee to help them and so far all that has happened is they got there bank accounts closed for righting fraudelent checks. Nobody has been arrested though so that is interesting but I am following there progress closely.

At this point, as you can see, it’s actually getting kind of pathetic. These stories always seem pretty silly, but there are plenty of bottom feeders who prey on the kind of people who believe this stuff.

But of course, I don’t want to leave you without the answer. What is the number on the back of your Social Security card? Here’s the answer:

FedWorker: The numbers on the back are inventory control. Each paper blank now has a number and must be accounted for

And a bit more detail from a speech by Donald Walton, a U.S. bankruptcy trustee, on eight “key signs that can identify a subject social security card as either legitimate or fraudulent.” Here’s #7:

Of course, he would say that, wouldn’t he? He’s probably a bankruptcy trustee for the Bilderbergers.