So how about those backscatter scanners? Everybody hates them. “Don’t touch my junk” is about to be added to “live free or die” and “give me liberty or give me death” in the pantheon of great expressions of American rebellion. I wish I could join in, but unfortunately I’m already on record a year ago as not caring:

I’ll defer to the experts on how and where these devices are best used, but privacy concerns strike me as daft. Yes, the machines show the shape of your body under your clothes. Big deal. That strikes 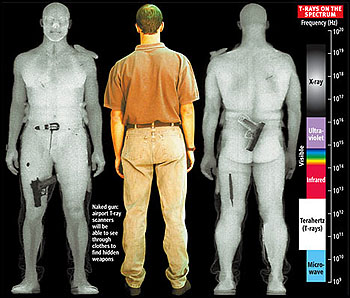 me as way less intrusive than pat-downs, wands, bomb-sniffing dogs, hand inspections, and no-fly lists. If we put up with that stuff, why on earth would we suddenly draw the line at a full body scanner?

I still feel this way. In fact, I think it’s a pretty good sign of a country gone insane that this — TSA screeners occasionally viewing a vague outline of your body — is what’s finally driven everyone over the edge. Shoes, laptops, liquids, wands, special screenings, warrantless wiretaps, you name it. They annoyed us, but we accepted them. But this! Finally left and right can unite in outrage over government run wild.

But fine. I’m a phlegmatic middle-aged man, and I understand not everyone feels as cavalierly about this as I do. I think it’s crazy, but I get it. But craziness aside, I still want to know if the things work. That’s about a hundred times more important than whether they confirm to a bored TSA screener that I really ought to lose a few pounds. And here’s the thing: it sure seems as if they work. It’s the very fact that they work that has everyone so outraged. They can show things an ordinary scanner can’t. So I was interested in Noah Shachtman’s take on this in the Wall Street Journal today:

The larger question is whether the TSA’s tech-centric approach to security makes any sense at all. Even the most modest of us would probably agree to a brief flash of quasi-nudity if it would really ensure a safe flight. That’s not the deal the TSA is offering. Instead, the agency is asking for Rolando Negrin-style revelations in exchange for incremental, uncertain security improvements against particular kinds of concealed weapons.

Like I said, I think the privacy concerns are close to insane. But I do care about whether we’re spending billions of dollars on technology that doesn’t do us any good. Looking at the pictures the scanners produce, it sure seems as if they’re more effective than standard screening. So can someone please explain why they aren’t?