Chrystia Freeland has a piece in this month’s Atlantic about the new “global elite” and the growing alienation of America’s super-rich. Her article flits from one point to another with enough abandon that it’s not always easy to figure out where she’s going, but one interesting theme that runs throughout the narrative 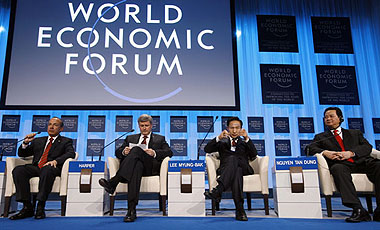 is that intense globalization goes a long way toward explaining why the super rich don’t really seem to care much anymore about all the rest of us:

The U.S.-based CEO of one of the world’s largest hedge funds told me that his firm’s investment committee often discusses the question of who wins and who loses in today’s economy. In a recent internal debate, he said, one of his senior colleagues had argued that the hollowing-out of the American middle class didn’t really matter. “His point was that if the transformation of the world economy lifts four people in China and India out of poverty and into the middle class, and meanwhile means one American drops out of the middle class, that’s not such a bad trade,” the CEO recalled.

….Speaking at the [Aspen Ideas Festival], Thomas Wilson, CEO of Allstate, also lamented this global reality: “I can get [workers] anywhere in the world. It is a problem for America, but it is not necessarily a problem for American business … American businesses will adapt.” Wilson’s distinction helps explain why many of America’s other business elites appear so removed from the continuing travails of the U.S. workforce and economy: the global “nation” in which they increasingly live and work is doing fine — indeed, it’s thriving.

The super rich, she writes, “are becoming a transglobal community of peers who have more in common with one another than with their countrymen back home.” Thus the fury of the financial elite at the suggestion that perhaps they were responsible for the crash of 2008 or that they owe it to the rest of the country to do anything about it:

When I asked one of Wall Street’s most successful investment-bank CEOs if he felt guilty for his firm’s role in creating the financial crisis, he told me with evident sincerity that he did not. The real culprit, he explained, was his feckless cousin, who owned three cars and a home he could not afford.

….A Wall Street investor who is a passionate Democrat recounted to me his bitter exchange with a Democratic leader in Congress who is involved in the tax-reform effort. “Screw you,” he told the lawmaker. “Even if you change the legislation, the government won’t get a single penny more from me in taxes. I’ll put my money into my foundation and spend it on good causes. My money isn’t going to be wasted in your deficit sinkhole.”

I don’t know if this attitude is truly new. Maybe not as much as Freeland suggests. Still, it certainly feels as if America is dominated more and more by an elite class that cares less and less about the public good because they don’t really feel like they have a stake in the public good anymore: they’ve never served in the Army or the Peace Corps, their kids never come within yelling distance of public schools, they donate their money exclusively to their own churches and their own global foundations, and they whine constantly about taxes even though their incomes have skyrocketed and tax rates have fallen dramatically over the past several decades. To them, taxes aren’t part of a social contract, they’re just pure welfare: they don’t care about education or infrastructure or unemployment or healthcare because they don’t have to. Within their own bubble, they don’t need to rely on the public versions of any of that stuff. Felix Salmon adds this:

When it comes to US plutocrats, [] most of them are very similar to the Russian oligarchs who seized their country’s natural resources — they’re bankers and hedge-fund managers who seized their country’s financial resources. They produced no goods, and they created no jobs — quite the opposite. And so it makes sense for Americans who have lost their jobs and their hope to reclaim those financial resources, through mechanisms like a wealth tax or a financial transactions tax. The Silicon Valley elite would happily pay such things. And if the angry bankers went off to destabilize some other financial system, they wouldn’t actually be missed.

He’s not optimistic about the prospect of the American public ever rebelling against our ruling elites, and he’s probably right. Ever since the demise of organized labor, the working and middle classes simply haven’t had the kind of energetic, institutional presence that allows them a serious voice in our political culture. The elites are winning because, at the moment, there’s really nobody left to fight them.