I might be the last person to notice this, but I still sort of wonder what it says about us. I was over at Dave Weigel’s place a few minutes ago, and he linked to a Twitter post by Jim Geraghty, who I don’t happen to follow. 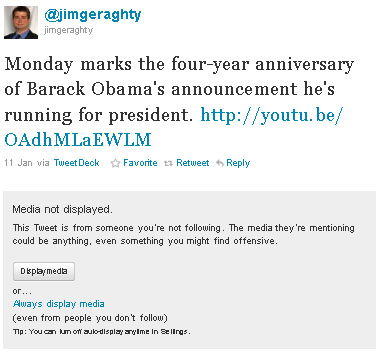 When I clicked the link, it included the following message:

This Tweet is from someone you’re not following. The media they’re mentioning could be anything, even something you might find offensive.

It could be anything! We can’t have that, can we? Best to hide it from sensitive eyes.

This is, obviously, no big deal, and you can change your default setting pretty easily to see everything automatically. Still, it seems a little dismaying that we’re so delicate these days that even when we actively click on a link, we apparently need to be protected from the mere possibility of getting a fleeting glimpse of something we might find offensive. Buck up, America!

And while we’re on the subject of why not a single Republican has announced a presidential candidacy yet — yep, that’s the subject — isn’t the answer obvious? It’s because they all know Barack Obama is as good as a shoo-in in 2012. Unless something cataclysmic happens, the only reason for any Republican to run is either as a vanity candidate or to get practice for 2016.