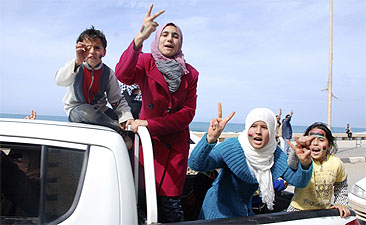 And the New York Times:

The faltering government of the Libyan strongman Col. Muammar el-Qaddafi struck back at mounting protests against his 40-year rule, as helicopters and warplanes besieged parts of the capital Monday, according to witnesses and news reports from Tripoli….Over the last three days Libyan security forces have killed at least 223 people, according to a tally by the group Human Rights Watch.

Qaddafi is carpet bombing his own people? Jesus Christ. His own diplomats are now disowning him, and not a moment too soon. More here, including an explainer and continuous updates.