Over at the Economist, Erica Grieder has given up on Social Security:

Every so often I get a document from the Social Security Administration in a green-edged envelope, and I open it straight away, thinking it might be important. Instead, I find that it’s just a statement of my Social Security earnings and future benefits, a concept so absurd that I immediately recognise it for fiction….If I stopped working now, this document says, I would receive a couple thousand dollars a month in benefits at whatever age it is they suggest I retire, something I obviously do not expect to ever be able to do.

I just don’t get it. Why do smart people keep saying stuff like this? Medicare is a problem. But unless you believe that the United States is literally going to collapse in the near future, Social Security isn’t. Period.

The weird thing about this is that Social Security isn’t even hard to understand. Taxes go in, benefits go out. Unlike healthcare, which involves extremely difficult questions of technological advancement and the specter of rationing, Social Security is just arithmetic. 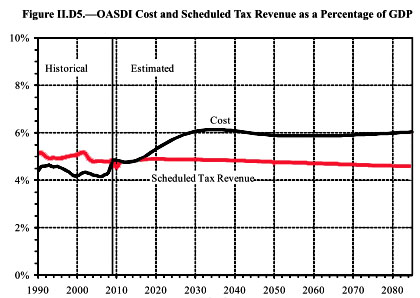 The chart on the right tells you everything you need to know: Right now, Social Security costs about 4.5% of GDP. That’s going to increase as the baby boomer generation retires, and then in 2030 it steadies out forever at around 6% of GDP.

That’s it. That’s the story. Our choices are equally simple. If, about ten years from now, we slowly increase payroll taxes by 1.5% of GDP, Social Security will be able to pay out its current promised benefits for the rest of the century. Conversely, if we keep payroll taxes where they are today, benefits will have to be cut to 75% of their promised level by around 2040 or so. And if we do something in the middle, then taxes will go up, say, 1% of GDP and benefits will drop to about 92% of their promised level. But one way or another, at some level between 75% and 100% of what we’ve promised, Social Security benefits will always be there.

This is not a Ponzi scheme. It’s not unsustainable. The percentage of old people in America isn’t projected to grow forever. Lifespans will not increase to infinity.1 Taxes go in, benefits go out. It’s simple.

Now, Social Security is not a very generous program, so it’s possible that you won’t want to retire on its modest benefits. But short of some kind of financial apocalypse — in which case we’ve got way bigger things to worry about anyway — Social Security benefits will be there for everyone alive today. Why is it that so few people seem to get this?

1Well, sure, they might. Who knows what medical breakthroughs we’ll come up with? But lifespans have been increasing at a very slow rate for many decades now, and there’s nothing on the horizon that suggests this will change suddenly. If it does, we’ll have to deal with it when it happens, but there’s no reason to think we should plan for it now.