One of the most impressive accomplishments of the modern right is its ability to generate plausible technical papers to justify conservative tropes that are basically ridiculous. For example, during last year’s campaign it was popular to claim that our economy was weak because of regulatory uncertainty. This made no real sense at all. Our economy is weak because of economic uncertainty: businesses don’t have enough customers to make it worth investing in new capacity or hiring new workers, and they aren’t sure when or if new customers will appear in the future. Unfortunately, that didn’t make for very good campaign trail bashing. Republicans wanted to convince people that the economy was weak because President Obama and congressional Democrats kept passing onerous new regulations that had businesses scared to death, so that’s the story they kept repeating ad nauseam.

It never really caught on outside of campaign stump speeches, though, because — well, because it was ridiculous. What to do? Answer: find someone to write a technical paper demonstrating that regulatory uncertainty really is holding back the economy. But who could they get for this job?

Paul Krugman provides the answer: none other than Alan Greenspan. Krugman’s comment after reading the paper:

I could go through the weak reasoning, the shoddy econometrics that ignores a large literature on business investment and ignores simultaneity problems, etc., etc.. But never mind; just consider the tone.

Greenspan writes in characteristic form: other people may have their models, but he’s the wise oracle who knows the deep mysteries of human behavior, who can discern patterns based on his ineffable knowledge of economic psychology and history.

Sorry, but he doesn’t get to do that any more. 2011 is not 2006. Greenspan is an ex-Maestro; his reputation is pushing up the daisies, it’s gone to meet its maker, it’s joined the choir invisible.

Yep. Brad DeLong does the dreary work of taking down Greenspan in detail here. Past posts on this site about the uncertainty meme are here, here, and here. Conservative economists piling on the uncertainty bandwagon here. And the chart below shows what small businesses are really afraid of right now: low sales, not the specter of the federal jackboot.

But all that aside — which is to say, aside from the actual truth of the uncertainty meme — it’s impressive, as usual, that the conservative movement managed to find such a big name to put his name to defending the indefensible. After all, news reporters almost have to take the uncertainty meme seriously now, and that’s really all that matters. Mission accomplished! 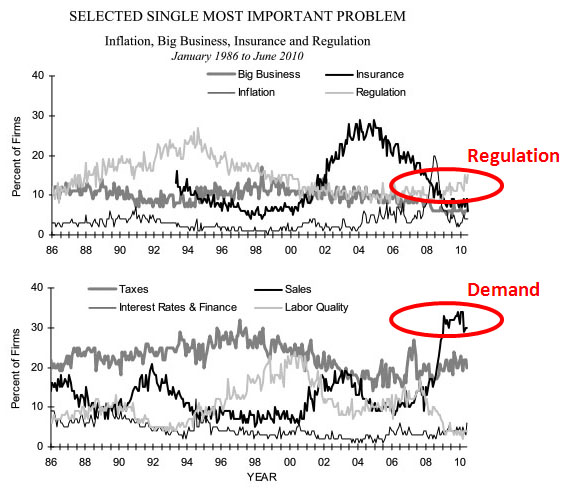