Paul Ryan has taken to asking if President Obama is “an Erskine Bowles Democrat or a Nancy Pelosi Democrat?” Well, if this is the best that Bowles can do, I guess it makes Obama’s choice a lot easier:

Mr. Bowles’s tone on the call was grim. “The problem is real,” he said. “The solutions are all painful. There is no easy way out.” At one point, he said if the country doesn’t do anything to tackle the debt, “we’re going to have one hell of a crisis.”

….Mr. Bowles had harsh words for fellow Democrats. He dismissed the idea that raising taxes alone might help erase the deficit, saying “raising taxes doesn’t do a dern thing” 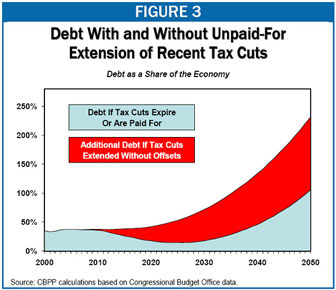 to address health care costs that are projected to be a big driver of future fiscal problems.

If there’s anything that could be called a wonkish consensus on the left, it’s this: we should eliminate the Bush tax cuts in a couple of years when the economy has recovered, and we need to rein in the long-term growth of healthcare costs. It’s true that taxes don’t address healthcare costs,1 but it’s just sophistry on Bowles’ part to put it like that. Taxes do address the medium-term deficit, and that’s important. Quite separately, PPACA makes a start on holding down healthcare costs and thus addressing the long-term deficit, and I hardly know anyone on the left who doesn’t agree that more needs to be done.

But I doubt that I need to tell Bowles that there are no common sense ideas along these lines actually on the table, and that’s not because of his fellow Democrats. It’s because of congressional Republicans, who flatly refuse to consider tax increases under any circumstances whatsoever and who have no serious ideas for addressing rising healthcare costs.

Jon Chait has more on this, including a more detailed takedown of Bowles’ own proposals for healthcare, which are almost laughably inadequate.

1I’m talking about the Bush tax cuts here. As Matt Yglesias and Brian Beutler point out on Twitter, excise taxes aimed at healthcare plans can indeed slow the growth of healthcare outlays.