Like me, you’ve probably been hearing for years that small businesses are the engine of job creation in the United States. But that’s an outdated view. The number of new startup businesses has declined sharply since the beginning of the 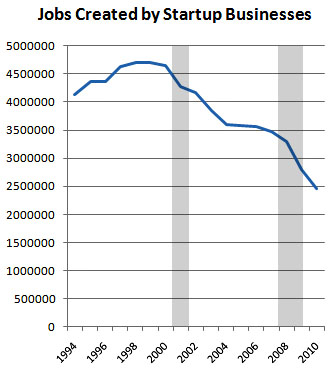 ….The number of jobs created from establishment births peaked in the late 1990s and has experienced an overall decline since then. The decrease in birth-related employment during the latest recession is the largest in the history of the series, followed closely by the period of “jobless recovery” after the 2001 recession.

Since the recession began in 2008, the biggest net generator of jobs has been neither small businesses nor large businesses. It’s been medium-sized businesses.