From Newt Gingrich, after two days spent furiously rowing back his Meet the Press attack on Paul Ryan’s Medicare plan:

Any ad which quotes what I said on Sunday is a falsehood.

You have to give the guy credit for stones, I guess. On Sunday, he called Ryan’s plan “right-wing social engineering” and said he was opposed to it. Within hours he was getting hammered by just about every conservative luminary in the country and watching his presidential campaign go up in smoke. So first he tried to pretend 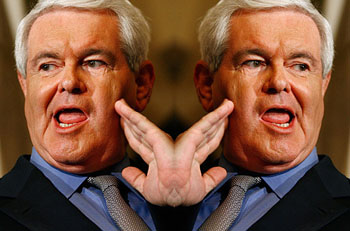 that NBC host David Gregory had somehow tricked him, even though Gregory’s question was a pretty straightforward softball, and Gingrich’s answer was obviously a considered one. Then Gingrich explained that his language had probably been a wee bit “too strong.” Then he blamed the liberal media for taking his comments “out of context.” Then he suggested that his views were “evolving,” and the press really needed to keep up. Then he “clarified” that what he really supported was a voluntary version of the Ryan plan that could be implemented right now, instead of 10 years from now. Then he called Paul Ryan to apologize. Finally, tonight, having apparently convinced himself that 48 hours of abject abasement had literally erased what he said on Sunday, he declared that anyone who accurately quotes his Sunday statement in the future is a liar.

That’s impressive, even for Newt. But you know what’s really impressive? He’s demanding that his Sunday comments be officially declared oldthink even though he still doesn’t support Ryan’s plan. Chutzpah, baby!