Steven Levitt is taking a lot of online abuse for this passage on his blog a few days ago:

I’ve never really understood why I personally come down on one side or the other with respect to a particular gray-area activity. Not that my opinion matters at all, but despite strong economic arguments in favor of drug legalization, the idea has always made me a little queasy. Conversely, although logic tells me that abortion as practiced in the 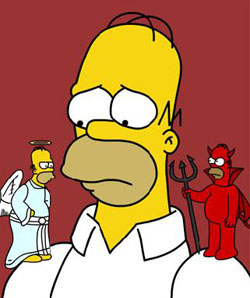 U.S. doesn’t seem like such a great idea (see the end of the abortion chapter in Freakonomics for our arguments on this one), something in my heart makes me sympathetic to legalized abortion.

It wasn’t until the U.S. government’s crackdown on internet poker last week that I came to realize that the primary determinant of where I stand with respect to government interference in activities comes down to the answer to a simple question: How would I feel if my daughter were engaged in that activity?

If the answer is that I wouldn’t want my daughter to do it, then I don’t mind the government passing a law against it. I wouldn’t want my daughter to be a cocaine addict or a prostitute, so in spite of the fact that it would probably be more economically efficient to legalize drugs and prostitution subject to heavy regulation/taxation, I don’t mind those activities being illegal.

This is, logically, pretty lame. If I had a daughter, I probably wouldn’t want her to get a tattoo, play videogames all day, or pursue a career in the WWF. But neither I nor Levitt would think even for a moment that tattooing, videogame playing, or WWF wrestling should be outlawed.

Still, I think Levitt performs a valuable service here. Chattering class types tend to intellectualize morality, but the vast majority of people view it through a lens much closer to Levitt’s “would I mind if my daughter did it?” heuristic. And one of the reasons for this is that ordinary people often have a clearer view of human nature than chatterers do. There are lots of activities we AP-class types find acceptable — drug use, gambling, etc. — because we sort of assume that everyone has the same level of impulse control that we do. And if you have good impulse control, then drugs and gambling are just pleasant ways of filling in your free time. And even if you don’t have good impulse control, you probably have a decent support network to help you if things turn pear shaped. These things may have their problems, but they’re manageable problems.

But if you’re not part of the AP-class cohort, there’s a pretty good chance that your impulse control isn’t quite as good as all that, and an excellent chance that even if it is, you’re keenly aware that good impulse control isn’t exactly universal. And that means your view of things like gambling and drug use are considerably dimmer. You’d just as soon your daughter didn’t get involved with that stuff because you’ve seen too often the effect it has on people with moderate education, moderate to poor impulse control, moderate to low incomes, and non-great support networks. Logically there might be a case for a lenient attitude, but your real-life experience tell you that it’s a ticking time bomb best kept under tight control.

This is just something to think about, not some grand pronouncement about moral calculus. But it’s worth keeping in mind sometimes that the broad working and middles classes often have different moral sentiments than us well-off, highly verbal types, and it’s not always because they go to church more than us or anything like that. It’s because they live in different communities and this stuff affects them differently than it does us. As always, where you stand depends on where you sit.