The Fed’s Jeremy Nalewaik argues that a measure of GDP using income levels is a more reliable guide to the actual business cycle than the traditional measure of GDP using spending. If that’s true, says Justin Wolfers, the recession started nearly five years ago and was much deeper than we think: GDP per capita dropped 7% and is still well below its pre-recession level.

And what are we doing about this? Pretty much nothing. Apparently we’re content to follow Japan into oblivion. 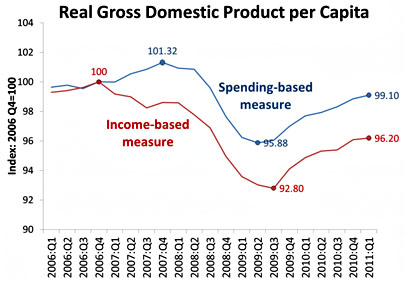