David Brooks has a scathing column about Fannie Mae today, based largely on Reckless Endangerment, a new book by Gretchen Morgenson and Joshua Rosner. A few excerpts:

Fannie Mae co-opted relevant activist groups, handing out money to Acorn, the Congressional Black Caucus, the Congressional Hispanic Caucus….Fannie ginned up Astroturf lobbying campaigns….Fannie lavished campaign contributions on members of Congress….Fannie executives ginned up academic studies. They created a foundation that spent tens of millions in advertising. They spent enormous amounts of time and money capturing the regulators who were supposed to police them.

Morgenson and Rosner write with barely suppressed rage, as if great crimes are being committed. But there are no crimes. This is how Washington works. Only two of the characters in this tale come off as egregiously immoral. Johnson made $100 million while supposedly helping the poor. Representative Barney Frank, whose partner at the time worked for Fannie, was arrogantly dismissive when anybody raised doubts about the stability of the whole arrangement.

I think this is basically right, and Fannie deserves most of the grief that it’s gotten. But it doesn’t deserve the paragraph that follows:

Of course, it all came undone. Underneath, Fannie was a cancer that helped spread risky behavior and low standards across the housing industry. We all know what happened next.

It’s absolutely legitimate to be mad as hell at what Fannie did. It’s not legitimate, though, to pretend that Fannie was really a motivating force behind the financial crash. The evidence is pretty clear on this point: although Fannie (and Freddie Mac) expanded their share of the mortgage securitization market dramatically in the 80s and 90s, their market share plummeted 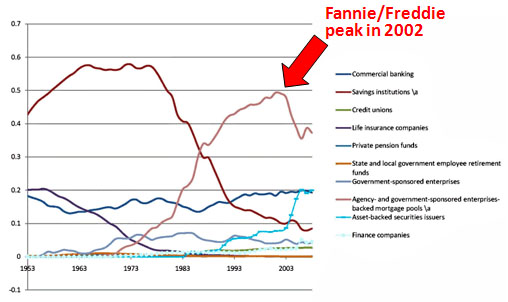 just as dramatically at exactly the time when the housing bubble really started to take off in 2002. It was mostly the private sector that drove the declining standards in home loans during the bubble, with Fannie and Freddie playing catchup only years later after they had lost a big chunk of market share. That was a bad move on their part, and by coming in late they ended up saddling themselves with the very worst quality loans from the 2005-06 era. These collapsed almost entirely, requiring a massive taxpayer bailout.

This is important. Fannie and Freddie screwed up badly during the tail end of the housing bubble, and they certainly played a general role in promoting home ownership for many years before that — a role that was pretty enthusiastically endorsed by everyone else in Washington too, both Democrat and Republican. They shouldn’t be let off the hook for that. But did they drive the housing bubble? No. Wall Street is desperate for confirmation that they weren’t really to blame for the collapse in underwriting standards and the securitization mania that followed in the early aughts, but they shouldn’t be allowed to get away with this no matter how many conservative think tanks are in the bag for them. Whether you love government agencies or hate them, the evidence is clear: The bubble-induced financial collapse of 2008 was mostly the fault of the private sector, which went almost literally insane with its financial engineering and tacit endorsement of mortgage fraud from 2000 through 2006. Like it or not, ’twas Wall Street that killed the beast.

UPDATE: Jonathan Bernstein: “David Brooks today singles out Barney Frank. The same Barney Frank whose Democrats were the minority party in the House from 1995 through 2006. Hey, for all I know Frank was incredibly evil during those years (I haven’t read the book Brooks is working from), but it just couldn’t have mattered very much, at least in the twelve years leading up to the crisis.”

Dean Baker: “There’s a small problem in this story. The worst junk mortgages that inflated the housing bubble to extraordinary levels were not bought and securitized by Fannie and Freddie, they were securitized by Citigroup, Merrill Lynch, Goldman Sachs, Lehman and the other private investment banks. These investment banks gobbled up the worst subprime and Alt-A garbage that sleaze operations like Ameriquest and Countrywide pushed on homebuyers.”