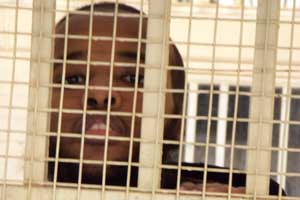 Gulet Mohamed, a 19-year-old Virginian, behind bars in a Kuwaiti deportation facility. His family and lawyer allege that he was detained and beaten at the behest of the United States government—a charge the government denies.Photo by Mohed Mohamed.

Kevin is on vacation this week, so Andy Kroll and I will be filling in.

During the Bush years, America’s chattering classes were engaged in a grand argument: should the people we had captured in the war on terror be handled by the courts, or by some other process? Civil libertarians argued that terrorist suspects who were not US citizens should have meaningful access to trials in federal courts.

Civil libertarians have lost that argument. The defeat is total: in the White House, on Capitol Hill, in the courts, and, crucially, in the court of public opinion. Indefinite detention of non-citizen terrorist suspects without charge or trial remains the official policy of the United States, and none of the most infamous non-citizen terrorist suspects will be tried in federal court.

President Barack Obama’s administration hasn’t added any new prisoners to Guantanamo, but as things stand, it’s only a matter of time before that happens. Eventually, there will be another Republican president, and the GOP’s position is clear: Mitch McConnell, the party’s leader in the Senate, took to the Washington Post op-ed page on Tuesday to call for two Iraqi nationals captured in his home state of Kentucky to be transferred to Gitmo. “Guantanamo is the place to try terrorists,” the headline blared.

Why shouldn’t we be consistent? Why are non-citizen terrorist suspects captured abroad “unprivileged belligerents” while those captured in the US are simply criminals? Why are American-born terrorists criminals and not unprivileged belligerents? Does the difference between committing a crime and being illegally at war with the United States really just depend on where you are captured or where you are born? The Obama administration does not have compelling answers to these questions. Its compromises and cave-ins on civil liberties have left its counterterrorism policy an inconsistent mishmash of Miranda warnings for foreigners and proxy detention and Hellfire missiles for Americans.

The family of Anwar al-Awlaki, a US citizen who is reportedly on a list of people the military is authorized to kill without charge or trial, lost their court case to force the government to explain why it believes it has the legal right to order his death. Young Muslim American men travel overseas only to discover that they’re on the no-fly list when they try to return—and that they can’t go home unless they answer the FBI’s questions. Americans with dark skin tones and “suspicious” names find US-government-owned GPS devices on their cars. The PATRIOT Act gets renewed while everyone is busy talking about how great it is that the SEALS killed Osama bin Laden. And senior members of Congress call for US citizens suspected of terrorism to be stripped of their citizenship and sent to—where else—Guantanamo.

The rights of all people accused of terrorism have been dramatically rolled back over the past ten years. So don’t expect that American citizenship will protect you when the government decides that you might be a terrorist, too.