I haven’t been blogging about the great McKinsey Obamacare study flap, but in a nutshell, McKinsey conducted a survey of employers and concluded that 30% of all companies would stop providing health coverage once Obamacare kicked in in 2014. Conservatives immediately sounded the alarm, but McKinsey refused to explain their methodology or divulge anything about either the questions they asked or how they “educated” respondents before getting their answers.

Under considerable pressure, McKinsey finally released a brief summary of their methodology along with a weasely clarification that their report wasn’t meant to be a prediction and had only said that 30% of companies “might” stop providing health insurance, not “would.” Whatever. It was too late: the 30% estimate had long since become a piece of conservative lore about the dire effects of Obamacare.

But how likely is it to be true? No one can say for sure, but the reason the McKinsey study provoked so much outrage — aside from the peculiar fact that they refused to explain how the study was conducted — is that it was light years away from every other 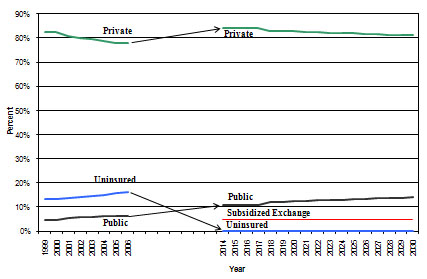 estimate that had been done. In fact, a team of health economists had just recently done a (very well documented) simulation of the effects of Obamacare and came to a very different conclusion: the decrease in private insurance rates would be on the order of 3%, over two decades, not 30% over two years. They looked at the likely effect of three things: (1) the expansion of Medicaid, (2) the creation of subsidized insurance via exchanges, and (3) the Cadillac tax. The chart on the right, kindly sent to me by Steve Pizer, one of the authors of the study, summarizes the results of their simulation. The number of uninsured goes down to nearly zero, the number of publicly insured goes up to about 15%, and the number of people covered by private insurance declines only a smidgen.

Is this estimate correct? Who knows. But it’s carefully done and the methodology is open to all for criticism. All things considered, it’s probably way more likely to be close to the mark than McKinsey’s study. You probably don’t have to worry much about your employer suddenly deciding to end your healthcare coverage when Obamacare starts up for real in 2014.