A few weeks ago I criticized a David Brooks column that tried to pin the blame for the housing bubble and its subsequent collapse on Fannie Mae. Afterwards, though, I felt a twinge of guilt. The column was based largely on Reckless Endangerment, by Gretchen Morgenson and Joshua Rosner, and I hadn’t read the book. Maybe there was more to this than I thought. So I read the book.

And it was…..weird. The first hundred pages or so were about Fannie Mae in the 90s, when Jim Johnson turned a formerly low-key quasi-governmental utility into a full-blown Wall Street firm obsessed with growth, market share, and executive compensation. Johnson essentially used his political connections with Congress to parlay Fannie’s low cost of funds 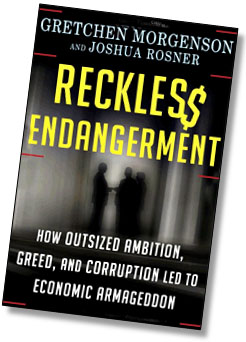 (a consequence of its implicit government guarantee) into a steady stream of ever-growing profits and higher pay. This part of the book is pretty good.

Then the book morphs into something different. Fannie largely disappears from the scene, to be replaced by a couple hundred pages about the subprime mortgage market of the aughts. This part of the book was OK, but not great. Joe Nocera and Bethany McLean told the story a lot better in All the Devils are Here.

But there was also a third strand woven throughout the book, one that tried to blame Fannie Mae (and, to a lesser extent, Freddie Mac) for the Great Collapse of 2008. And this piece of the book just didn’t hold up. Morgenson and Rosner’s basic argument is a little hard to pin down precisely, but basically they suggest that Johnson’s go-go management of Fannie in the 90s somehow gave the green light to Wall Street to go crazy in the aughts. Here’s a typical passage, about bank lobbying to keep capital standards low in the late 90s:

Executives at the big banks had watched Jim Johnson’s success years earlier in ensuring that capital standards at Fannie Mae would be set exceedingly low. They knew that their profits would be bolstered if they could reduce the amount of money regulators required them to set aside for problem loans. Smaller set-asides meant more money to be deployed in lending or purchases of income-producing securitieis. Banks also recognized what Johnson had — higher profits means loftier executive pay.

Nice try, but does anyone take this seriously? Banks have been keenly aware of the benefits of low capital requirements for about as long as they’ve been aware that higher profits mean higher executive pay: namely forever. Jim Johnson had nothing to do with it.

The book is studded with passages like this that try to imply that Wall Street might have remained sober and prudent throughout the aughts if only Fannie Mae had set a better example. Robert Kuttner gives this the treatment it deserves in the American Prospect this month:

As Morgenson and Rosner obliquely acknowledge elsewhere in the book, other Wall Street firms created the subprime bubble precisely because Fannie would not buy those loans. Morgenson and Rosner admit this contradiction when they write of the Wall Street-financed boom in poor-quality loans that took off circa 2001: “Because higher-quality borrowers were still at this time the domain of Fannie Mae and Freddie Mac, Wall Street could not hope to compete in this area. So the big investment firms stepped up their interest in alternative mortgage products offered to sub-prime or near-prime borrowers.” In other words, Wall Street went where Fannie prudently feared to tread.

Morgenson and Rosner contend that Fannie’s perdition began in the mid-1990s when the company started purchasing mortgages with down payments of just 5 percent. “Traditionally,” they write, “banks had required that borrowers put 20 percent of the property price down to secure a mortgage loan.” That’s an embarrassingly novice mistake. Veterans’ loans under the GI bill accepted zero down payments. For decades, the Federal Housing Administration has insured loans with down payments of 5 percent—and these loans were purchased by Fannie Mae. Private mortgage insurers, which began competing with the FHA in the 1960s, also offered insured loans with small down payments. How could Morgenson and Rosner have missed something so basic and central to the story? What made these loans safe and insurable and liquid in the secondary market was careful underwriting, of the property value and the borrower’s capacity to pay, not the down payment. It was the lack of serious underwriting that made subprime such a disaster.

The whole thing is well worth a read. Fannie Mae was, in a lot of ways, a rogue and quasi-corrupt agency for much of the 90s and aughts, and its behavior ended up costing taxpayers a bundle. That story deserves telling, and any honest telling leads to an obvious conclusion: at a minimum, Fannie and Freddie need to be seriously cleaned up, and quite possibly they should simply be phased out of existence entirely.

But were they responsible for the housing bubble and its subsequent collapse? Nope. They might have made the very end stages a bit worse than they had to be, but both the bubble and the collapse were almost entirely creatures of the private sector. Strained psychoanalysis of Wall Street aside, the evidence could hardly be clearer on this point.