Here on the left, everyone has long wanted President Obama to nominate Elizabeth Warren to head up the new Consumer Financial Protection Bureau. It was mostly her brainchild, after all, and she’s been running it on an interim 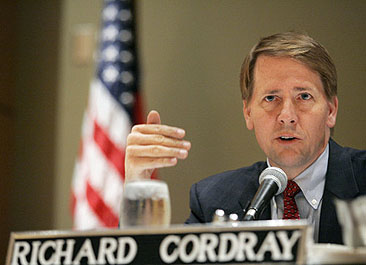 basis for nearly a year (as a “special advisor” to the president). But opposition to her appointment is strong, and over the weekend Obama decided instead to nominate Richard Cordray, a former Ohio attorney general who’s been running the enforcement arm of the CFPB since December.

The problem with this is that Warren isn’t the only potential head of the CFPB that Republicans dislike enough to filibuster. In fact, they dislike all of them. But it’s not personal, just business. They hate the whole idea of the CFPB so much that they’ve promised to keep anyone from running the agency unless some changes are made. Mike Konczal elaborates:

What are the strengths of the way the CFPB is structured in the Dodd-Frank Act? There are many, especially the consolidation of consumer regulation and focus on research. But three structural strengths stand out: it has a single director, there’s been careful attention paid to its budgeting process and it is just like other regulators in terms of accountability but with focus on consumer protection as its primary goal. These three parts of the CFPB were carefully planned, designed and fought for.

….[Those three] major strengths — a director, funding and accountability with a focus on consumer protection — are exactly what the Republicans want to dismantle. No doubt they are trying to stall and annoy the implementation of Dodd-Frank and prevent the CFPB from doing all its work — of course they are — but if there were three critical points where they could significantly weaken what the CFPB can do, these would be those three.

So there you have it. Republicans want to emasculate the agency almost completely because big banks don’t much like the idea of a consumer protection bureau. One way to do that is to change the operation of the agency in a way that makes it toothless. Another way is to prevent confirmation of a director, since several of its most important powers are only allowed to be carried out by a Senate-confirmed director and those powers become dead letters if they filibuster every possible candidate. That’s what Republicans have promised to do, and it’s why Ezra Klein thinks it’s hardly a huge loss that Obama didn’t nominate Warren:

Whoever is nominated to lead the CFPB is going to spend the next year of his life being filibustered by Republicans. The very best he can hope for is a recess appointment, in which case his tenure in the position would be relatively swift. So the question isn’t who you want leading the CFPB for the foreseeable future. It’s who you want spending his or her time being stopped from leading the CFPB for the foreseeable future. And it’s not clear that the answer to that question is “Elizabeth Warren.”

The real question is, why would anyone want to be this person? Richard Cordray knows what he’s in for, so why is he doing it? It’s mysterious. But then again, Cordray is a five-time Jeopardy! champion, so maybe he has something up his sleeve that the rest of us can only guess at. Wait and see.