I know this is beating a dead horse, but fun is fun. Here are the results of the latest Winthrop poll of South Carolina Republicans. 75% think “socialist” describes Barack Obama pretty well, 30% think he’s a Muslim, and 36% think it’s likely he was born in another country. Note that releasing his long-form birth certificate barely moved the needle about his birthplace.

In other, more substantive news, the poll suggests that Rick Perry is only slightly ahead of Mitt Romney, sort of a surprising result for such a bedrock conservative state. And this was before last week’s debate. I don’t think Perry is a dead duck or anything, but I do think that his frontrunner status has always been thinner than it seemed, and it’s way thinner now. Public Policy Polling confirms this: “Thursday night part of our Florida poll Romney led Perry by 2. Friday-Sunday part Romney led Perry by 10. Debate did matter.” He better get cracking. 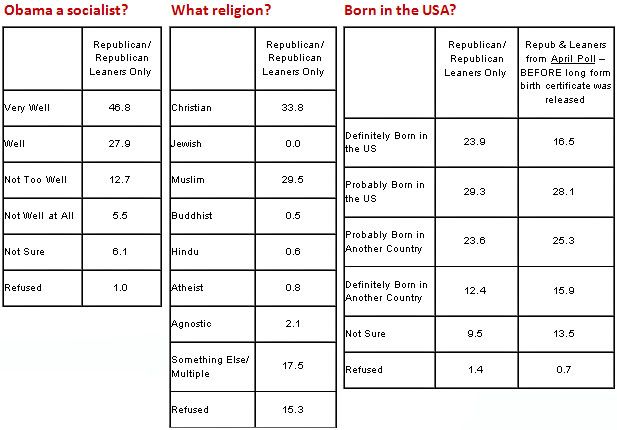