A few weeks ago, writing about the latest death spasms in the European banking system, I said: “The overnight market can dry up — well, overnight if a bank’s solvency comes into question…. It might not happen in a week, but it’s sure starting to look like it might happen in a month or two.”

Well, we’re now halfway through “a month or two.” So how are things going? Paul Krugman surveys recent events and asks:

Did the euro just enter its death throes? OK, I know that sounds over the top, and I hope it is. But recent developments are really, really bad.

Yes indeed. Greece looks increasingly hopeless, and the rest of Europe appears increasingly in little mood to help. Just the opposite, maybe. So what to do? Barry Eichengreen says eurobonds and fiscal union are a great idea, but they’ll take months or years to put in place. And Europe doesn’t have months or years: “The 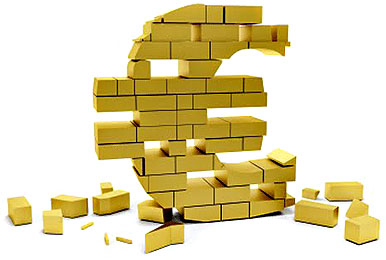 most recent Greek rescue, put in place barely six weeks ago, is on the brink of collapse. The crisis of confidence has infected the eurozone’s big countries. The euro’s survival and, indeed, that of the European Union hang in the balance.” Three things need to happen right away:

The first urgent task is for Europe to bulletproof its banks. Doubts about their stability are at the center of the storm. It is no coincidence that bank stocks were hit hardest in the recent financial crash.

….The second urgent task is to create breathing space for Greece. The Greek people are making an almost superhuman effort to stabilize their finances and restructure their economy. But the government continues to miss its fiscal targets, more because of the global slowdown than through any fault of its own.

I keep thinking that, when Greek default, cascading bank failures, or dissolution of the eurozone — or all three — appear truly imminent, European leaders will finally buckle down and do what needs to be done. But the last couple of weeks haven’t done much for my confidence on this score. If anything, Europe seems to be drifting ever further toward lifeboat ethics. The bad kind, that is. The every-man-for-himself kind. And we finally seem to be genuinely close to a point of no return. Once the financial markets decide to attack — either a country or a banking system — they can’t be bought off with half measures. It’s either a full-scale, damn-the-torpedoes rescue or else it’s catastrophe. And right now a full-scale rescue isn’t looking very likely. Instead, “austerity” is the order of the day, which is sort of like thinking that maybe the steerage decks are really the best place to ride out the sinking of the Titanic.

But hey, that’s just Europe, right? It’s not going to affect us, is it? Why, just a few days ago, Ben Bernanke said that our financial exposure to European problems was “manageable.” So there’s nothing to worry about. But then again, this is the same guy who said in 2007 that “the impact on the broader economy and financial markets of the problems in the subprime market seems likely to be contained.” So maybe it’s time to stock up on canned goods after all.

Is there a silver lining? No, there isn’t. But if you insist on one, here it is: since this time the epicenter of the problems is Europe, it’s possible that President Obama can convince the troglodytes in the Republican Party that any contagion that hits Wall Street is sort of like a foreign invasion. That seems like the only thing likely to get their blood flowing, so maybe we’ll actually be able to respond. You never know.