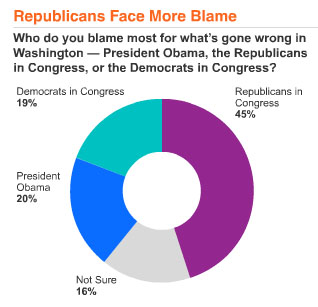 Here is one result from Bloomberg’s latest poll. (God knows why they decided to turn it into a pie chart—or a donut chart, I suppose—but that’s what they gave us.) At first glance, it looks like Obama is doing okay. At second glance, though, what it really means is that everybody hates everybody else. Democrats all think Republicans are responsible for screwing up the country, and Republicans all think Democrats are responsible. The only difference is that Republicans can’t decide who they hate more, Obama or Nancy Pelosi.

In other news, Republicans favor Rick Perry over Mitt Romney (26 percent to 22 percent), the overall electorate favors Obama over Perry (49 percent to 40 percent), a full 19 percent of Obama supporters say they no longer support him, and a trio of researchers say there’s now a 38 percent chance of a double-dip recession in the United States. You may decide for yourself which of these things to be most alarmed about.