Brad Plumer points today to a Dallas Fed report that, rather amusingly, demonstrates that a big reason Texas has done well during the recession is because of Fed policy. Roughly speaking, most of the Fed’s monetary policy works through bank channels, and since Texas banks were in better shape than most (thanks to Texas’s mild housing bubble), the Fed’s actions were especially effective there. That’s pretty interesting. But for sheer comedy gold, this chart is my favorite: 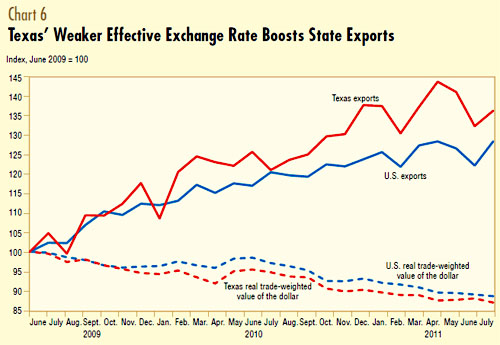 That “debased” dollar that tea partiers keep screaming about? Actually, it’s not really very debased in the first place. But it has weakened over the past couple of years, and it’s weakened especially against Texas’s major trading partners, primarily Mexico. And the Texas economy has benefited from that.

Maybe Rick Perry needs to send Ben Bernanke a a fruit basket or something?