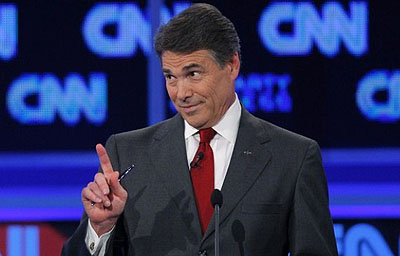 “Every time someone says something, he cocks his head with a little smile on his face,” Towery said. “Reagan would always move his head to one side and act as if he couldn’t quite believe what the other person was saying. I guarantee that’s what he’s trying to do.”

OK. I’ll keep my eyes open for that. And as long as we’re talking about debates, let’s also explode a myth. Here’s the conclusion of the article:

By now it’s a faded memory, but the first televised presidential debate in 1960, between John F. Kennedy and Richard Nixon, signaled the dawn of a new age of judgment on the part of debate watchers, one that launched a thousand image-consultant careers.

Nixon, sweating under the hot TV lights, his five o’clock shadow visible, seemed nervous and shifty compared with Kennedy, who bore an easy smile and suave demeanor. People remember that Kennedy won the debate. That was true for TV viewers. Radio listeners, immune to Kennedy’s visual appeal, gave the win to the sweaty guy.

This myth was seriously called into question a long time ago. The polling evidence is extremely thin to begin with — basically a single small survey that showed radio audiences with a better opinion of Nixon — and it’s unclear whether even that survey can be trusted. By 1960, TV was so widespread that its audience was fundamentally different from the radio audience, which by then was mostly rural, conservative, Protestant, and — quite likely — predisposed to like Nixon in the first place. Nixon’s sweaty brow and pale demeanor might have hurt him with the TV audience, but the evidence on this score is close to nonexistent.