Over the past three decades, the growth rate in justifications for skyrocketing executive compensation has been nearly as high as the growth rate of executive compensation itself. Globalization makes a great CEO more valuable than ever. Tournament theory makes high pay inevitable. Companies are bigger these days. The skill sets of modern CEOs dwarf those of past eras. Pay is more closely linked to performance. Blah blah blah.

All of these things have a kernel of truth (aside from pay for performance, which is mostly a myth), but even collectively they don’t explain much. What does explain a lot is 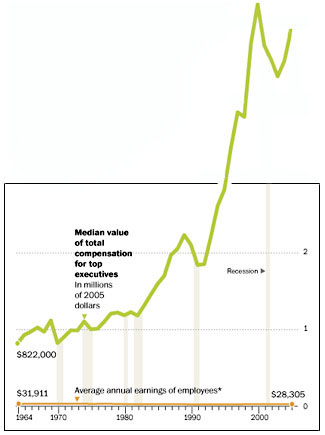 Today, Peter Whoriskey of the Washington Post tells us that the practice of peer group comparison is widespread:

It wasn’t until recently, however, that its pervasiveness and impact on executive pay became clear. Companies have long hid the way they set executive pay, but in late 2006, the Securities and Exchange Commission began compelling companies to disclose the specifics of how they use peer groups to determine executive pay.

Since then, researchers have found that about 90 percent of major U.S. companies expressly set their executive pay targets at or above the median of their peer group. This creates just the kinds of circumstances that drive pay upward.

The chart on the right tells the familiar tale. Adjusted for inflation, cash compensation for line workers has actually decreased over the past few decades, and even when you include healthcare compensation it’s grown only about 30% or so. In contrast, executive compensation over the same period has more than quadrupled.

Do they deserve this? Almost certainly not. There’s simply no good reason that a CEO of 2011 is worth 4x more than a CEO of 1970. The reason their pay has gone up is simple: for all practical purposes, CEOs set each other’s pay. And they keep raising each other’s pay because they can. It’s a pretty nice racket.