Jim Hamilton, an economist at UC San Diego who has done extensive work on the economics of oil spikes, has just published a summary of the current state of oil macroeconomics called “Oil Prices, Exhaustible Resources, and Economic Growth.” His conclusion: “The historical record surely dictates that we take seriously the possibility that the world could soon reach a point from which a continuous decline in the annual flow rate of production could not be avoided.”

Translation: peak oil might not be far away, and we should take it pretty seriously. And Hamilton’s research suggests strongly that when peak oil does arrive, it’s not going to be pretty:

Coping with a final peak in world oil production could look pretty similar to what we observed as the economy adapted to the production plateau encountered over 2005-2009. That experience appeared to have much in common with previous historical episodes that resulted from temporary geopolitical conflict, being associated with significant declines in employment and output. If the future decades look like the last 5 years, we are in for a rough time.

Most economists view the economic growth of the last century and a half as being fueled by ongoing technological progress. Without question, that progress has been most impressive. But there may also have 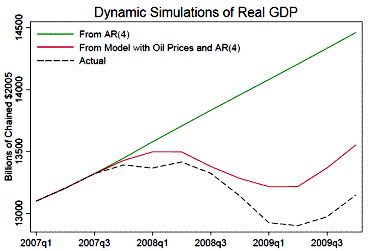 been an important component of luck in terms of finding and exploiting a resource that was extremely valuable and useful but ultimately finite and exhaustible. It is not clear how easy it will be to adapt to the end of that era of good fortune.

“Pretty similar” to 2005-09 means a big spike in oil prices that causes a big recession. The chart on the right shows what he means. The green line shows expected economic growth. The dashed line shows the Great Recession. And the red line? That’s his estimate of the effect of the huge spike in oil prices in 2007-08. If Hamilton is right, then the oil spike is responsible for about two-thirds of the Great Recession all by itself. The housing and credit bubbles are only responsible for a fairly small piece of it.

But even if Hamilton is wrong about the precise trajectory of the 2008 meltdown, the evidence is now clear that oil spikes have a very significant effect on the economy. And as the production of oil starts to plateau, oil prices are going to spike a lot. In fact, they’re likely to spike every time the global economy starts to grow. As I said the last time I reported on Hamilton’s work:

If this model is accurate—and if the ceiling on global oil production really is around 90 mbd and can be expanded only slowly—it means that every time the global economy starts to reach even moderate growth rates, demand for oil will quickly bump up against supply constraints, prices will spike, and we’ll be thrown back into recession. Rinse and repeat.

Hamilton’s language is cautious, but this is basically what he’s saying. Oil controls our economic future more than we’d like to believe.