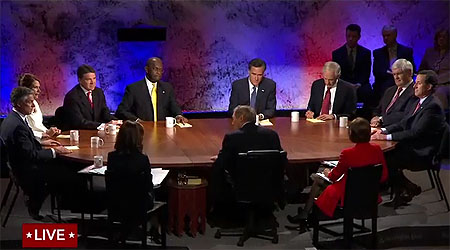 I only saw half of tonight’s debate because I forgot that Bloomberg even had a TV channel. When I remembered and went looking for it, I discovered that I do indeed get BloombergTV on my cable plan thanks to last year’s upgrade to digital. So now I know. In the end, though, I ended up watching the streaming version anyway since that made it more convenient to make snarky tweets in real time.

Rick Perry continues to amaze. I mean, after his last disastrous outing, he must have known that Job 1 was looking like he was ready for prime time. Instead, he looked completely unprepared, as if he was surprised that people were still asking him actual questions instead of just nominating him on the spot. Check out this response to a Romney monologue on China and the decline of American manufacturing:

And let me tell you, we are sitting on this absolute treasure trove of energy in this country. And I don’t need 999. We don’t need any plan to pass Congress. We need to get a president of the United States that is committed to passing the types of regulations, pulling the regulations back, freeing this country to go develop the energy industry that we have in this country.

Holy cow. That’s all he’s got after three weeks of prep? We have to quit talking about “this policy or that policy,” or worrying about Congress, and instead just man up and kick the economy in the balls? Urk. And when Karen Tumulty cross examined him over the similarity of his Texas investment fund to Solyndra, he looked like a deer in headlights even though you could have seen this question coming a mile away. Perry is barely ready for public access cable, let alone prime time.

(I got some grief a couple of months ago for suggesting that Perry just wasn’t very bright: “Americans might not care if their presidents are geniuses,” I said, “but there’s a limit to how doltish they can be too.” Anyone still want to give me any grief about that? I freely admit that this isn’t the biggest reason he’s falling in the polls, but I think it’s one of the reasons. And it’s a big reason he’s losing the invisible primary: insiders are assessing his obvious unwillingness to put in even the minimal work needed to address simple questions in a debate and concluding that he’s just flatly not up to the job.)

What else? Nothing really. The candidates in general continue to occupy some weird alternate universe where our biggest financial problem is that Wall Street is too regulated, our biggest health problem is that Medicare keeps denying treatments to old people, and our biggest economic problem is the intolerable burden of taxation we place on rich people. On an individual level, Rick Santorum continues to be bitter that so few people like him. Herman Cain continues to be a novelty candidate who can deliver sound bites with the conviction of a CEO giving a speech at a motivational seminar. Michele Bachmann continues to be out of it. And Mitt Romney continues to be strangely invulnerable to attacks. I know that Romney has so many negatives that it seems impossible for him to win, but somebody has to win, and I have a hard time seeing how it can be anyone else. The race is still his to lose.