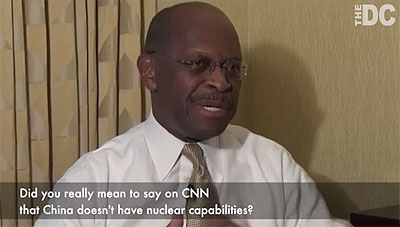 Ah. I see that Herman Cain has revised and expanded his remarks the other day about the nature of China’s nuclear arsenal:

Roger that. This is why I’m annoyed at Judy Woodruff for not following up on Cain’s original statement in her interview on Monday. She didn’t have to be confrontational about it. Just a flat, non-leading followup would have been fine. Something like this:

What exactly do you mean when you say China is “trying to develop” nuclear capability?

At that point, Cain either says something that makes it clear he knows China has nukes and he’s actually talking about something else, or else Cain says something along the lines of “Well, I’ve seen reports in the news media that China would like to develop nuclear weapons, and that’s something we can’t allow.”

Instead, she did nothing, and that gave Cain plenty of time to invent a cover story and then retail it to a friendly interviewer. What a wasted opportunity.