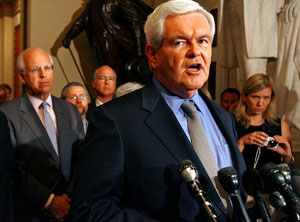 Newt Gingrich is the latest anti-Romney, so I guess that means we all have to pretend to take him seriously for the next few weeks. Fine. Here is Aaron Blake telling us that Gingrich has nothing but contempt for the debt reduction supercommittee:

Gingrich also discussed his own competing debt-reduction plan. Included in the plan is expanded energy exploration, giving states the authority to determine welfare eligibility, expanding research to search for cures to diseases such as Alzheimer’s, and instituting the “Lean Six Sigma” management program in the federal government.

I estimate that all of these things put together would reduce the federal deficit by…..hardly anything. Hell, even Motorola, which invented the Six Sigma program, only estimates that it’s saved about $1 billion a year on $30 billion in revenues. That’s about 3%, which sounds almost worthwhile, but it could only conceivably apply to about two-thirds of government, which makes it about 2%. And it’s almost certainly wildly inflated even at that, so figure 1%. The rest of his stuff might add another 1% if we were really lucky.

The 21st Century Contract with America is so large and covers so many changes necessary to get America back on the right track that it can’t possibly be developed by a small group. Instead, it will be developed with the help and support of the American people.

So there you have it. Newt has provided the yeasty ideas to get you started, and now it’s up to you to come up with a few trillion in savings. Just be sure none of your ideas are stupid, because Newt really, really hates stupid ideas. What’s more, Blake informs us that Gingrich “has demonstrated a skilled grasp of policy minutiae,” and since Blake is an objective hard news reporter, I guess it must be true. So please offer Newt only your very finest ideas so he can cut-and-paste a plan of his own that will blow everyone’s mind. I can’t wait.