E.J. Graff asked all the men to leave the room before she linked to this reddit piece below, but I didn’t. It’s from an HR person at a tech company explaining why women routinely get lower salary offers than men:

The reason they don’t keep up, from where I sit, is simple. Often, a woman will enter the salary negotiation phase and I’ll tell them a number will be sent to them in a couple days. Usually we start around $45k for an entry level position. 50% to 60% of the women I interview 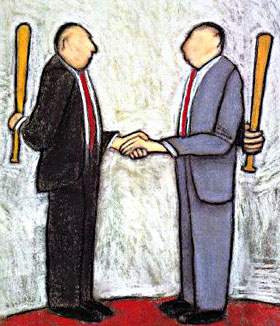 simply take this offer. It’s insane, I already know I can get authorization for more if you simply refuse. Inversely, almost 90% of the men I interview immediately ask for more upon getting the offer.

The next major mistake happens with how they ask for more. In general, the women I have negotiated with will say 45k is not enough and they need more, but not give a number. I will then usually give a nominal bump to 48k or 50k. Company policy wont let me bump more than 5k over the initial offer unless they specifically request more. On the other hand, men more frequently will come back with a number along the lines of 65k to 75k, and I will be forced to negotiate down from there. After this phase, almost all women will take the offer or move on to somewhere else, not knowing they could have gotten more if they asked.

At the end, most of the women I hire make between 45k and 50k, whereas the men make between 60k and 70k. Even more crazy, they ask for raises far less often, so the disparity only grows.

I apologize for sticking around, but there’s a reason. I’ve run into this before myself, and have always told women “Just ask! The worst that can happen is that they say no.” But that’s not actually the case. Here’s a bit of research on the subject:

So listen up, boys: there’s a reason women don’t negotiate as hard as men. Several of them, in fact. But one of these reasons is that men treat them shabbily when they do. So knock it off. Tell the women you love to negotiate the same as you would, and when they do, don’t hold it against them. OK?