In the LA Times today, Spike Dolomite Ward lays out Barack Obama’s essential political problem for all the world to see. The recession hit her family hard, she lost her health insurance, and then she got cancer:

Fortunately for me, I’ve been saved by the federal government’s Pre-existing Condition Insurance Plan, something I had never heard of before needing it. It’s part of President Obama’s healthcare plan, one of the things that has already kicked in, and it guarantees access to insurance for U.S. citizens with preexisting conditions who have been uninsured for at least six months.

…Which brings me to my apology. I was pretty mad at Obama before I learned about this new insurance plan. I had changed my registration from Democrat to Independent, and I had blacked out the top of the “h” on my Obama bumper sticker, so that it read, “Got nope” instead of “got hope.” I 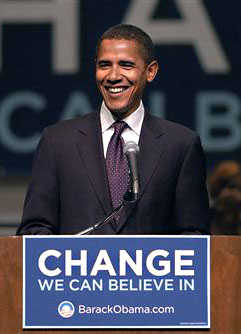 felt like he had let down the struggling middle class. My son and I had campaigned for him, but since he took office, we felt he had let us down.

So this is my public apology. I’m sorry I didn’t do enough of my own research to find out what promises the president has made good on. I’m sorry I didn’t realize that he really has stood up for me and my family, and for so many others like us. I’m getting a new bumper sticker to cover the one that says “Got nope.” It will say “ObamaCares.”

And there you have it: Obama’s core problem with his supporters from 2008, the ones who listened to his soaring rhetoric and believed he really was going to transform Washington—and have since been bitterly disappointed. This has always been something I could understand only intellectually, since I never for a second paid any attention to his stump speeches. Of course they soared! Of course they promised a new era! That’s what politicians always promise. Why on earth would anyone take this seriously, when every single other piece of evidence showed him to be a cautious, pragmatic, mainsteam, center-left Democratic candidate?

Beats me. But lots of people did take it seriously, and now Obama is stuck trying to convince them in very practical, non-soaring terms that he really has done a lot for them. That list is pretty long and includes a big stimulus bill, a landmark healthcare reform bill, student loan reform, an end to the Bush torture regime, the Lily Ledbetter Fair Pay Act, a hate crimes bill, a successful rescue of the American car industry, resuscitation of the NLRB, passage of New START, the death of Osama bin Laden, withdrawal from Iraq, a decent start on rationalizing Pentagon procurement, repeal of DADT, credit card reforms, unprecedented gas mileage improvements, a second stimulus in 2010, and passage of financial reform legislation.

Were there disappointments too? Sure. Obama badly mishandled cap-and-trade, has a weak record on civil liberties, escalated the war in Afghanistan, has been unaccountably sluggish on appointments, treated the financial industry too gingerly, and failed to seriously address underwater mortgages, among other things.

But that’s to be expected. This is the real world, not utopia, and Obama is a cautious, pragmatic, mainsteam, center-left Democratic president. So how do you win back the people who believed the soaring rhetoric and either don’t know or don’t care about Obama’s impressively long list of concrete achievements? It’s his essential dilemma. Maybe Spike Dolomite Ward can give him some suggestions.