Are American agents involved in an ongoing plan to kill Iranian nuclear scientists? Mark Perry says no: Israel’s Mossad is behind the operation, and in the past they’ve recruited assassins from Jundallah, a Pakistani militant group, by posing as American agents. Perry 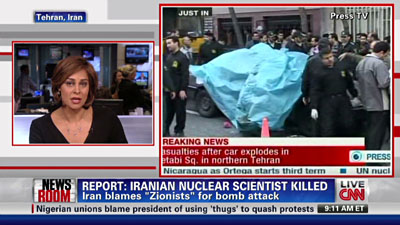 bases this on memos written during the Bush administration as well as interviews with six currently serving or recently retired intelligence officers:

While the memos show that the United States had barred even the most incidental contact with Jundallah, according to both intelligence officers, the same was not true for Israel’s Mossad….The officials did not know whether the Israeli program to recruit and use Jundallah is ongoing. Nevertheless, they were stunned by the brazenness of the Mossad’s efforts. “It’s amazing what the Israelis thought they could get away with,” the intelligence officer said. “Their recruitment activities were nearly in the open. They apparently didn’t give a damn what we thought.”

….According to one retired CIA officer, information about the false-flag operation was reported up the U.S. intelligence chain of command….The report then made its way to the White House, according to the currently serving U.S. intelligence officer. The officer said that Bush “went absolutely ballistic” when briefed on its contents.

“The report sparked White House concerns that Israel’s program was putting Americans at risk,” the intelligence officer told me. “There’s no question that the U.S. has cooperated with Israel in intelligence-gathering operations against the Iranians, but this was different. No matter what anyone thinks, we’re not in the business of assassinating Iranian officials or killing Iranian civilians.”

According to Perry’s sources, nothing was done about the Israeli program until Barack Obama took office, at which point he “drastically scaled back joint U.S.-Israel intelligence programs targeting Iran”:

“We don’t do bang and boom,” a recently retired intelligence officer said. “And we don’t do political assassinations.” Israel regularly proposes conducting covert operations targeting Iranians, but is just as regularly shut down, according to retired and current intelligence officers. “They come into the room and spread out their plans, and we just shake our heads,” one highly placed intelligence source said, “and we say to them — ‘Don’t even go there. The answer is no.'”