This morning’s topic was why gasoline prices have been rising. Today, the Washington Post essays a vastly more important topic: who are we blaming for rising gasoline prices? Here’s the answer in colorful bar chart form: 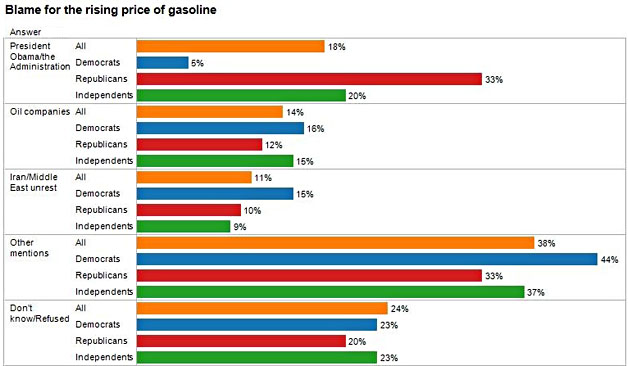 What to think of this? The primary correct answer is “supply and demand,” which isn’t on the list, and the secondary correct answer is tension in the Middle East, which garners 11% of the answers. “Other mentions” gets the most votes, but just what are these other things that people are blaming? The answer, it turns out, is: government, speculators, Congress, gas guzzlers, rising global demand, George Bush (!), the economy, OPEC, greed, Democrats, Republicans, and (my favorite) everybody/everything.

If you put the answers in a different set of buckets, it looks something like this:

(Don’t blame me that this adds up to 105%. Apparently some people gave more than one answer.)

Ezra Klein thinks this poll demonstrates an improvement of sorts, since 28% of Americans blamed Bush for rising gas prices after Katrina but only 18% are blaming Obama for the current rise. Maybe. But if I had to guess, I’d put this down to two things. First, Obama is just more popular than Bush was at the time. Everyone hated him after Katrina. Second, we’ve had a bunch of these price gyrations since 2005 and the public is getting used to them. It’s harder to blame the president when this stuff happens every year or so no matter who’s in office.

As for myself, I don’t know. On the bright side, only 1% of Americans blame environmental restrictions on domestic drilling, despite a full-bore Republican campaign to convince them otherwise, so that’s nice. On the other hand, I’d sure like to see a lot more people blaming supply and demand. Maybe 10% isn’t bad, all things considered, but I was ve-r-r-r-r-y generous about what I put in that bucket. The vast majority of Americans still have no clue what’s driving all this.