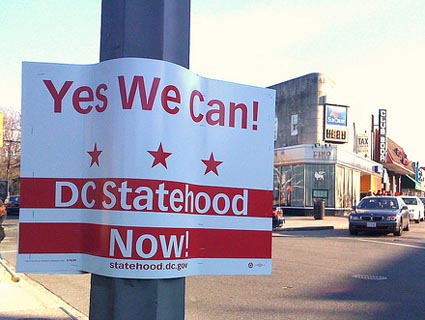 Harry Thomas Jr., the former Ward 5 City Councilman who relinquished his seat in disgrace after being indicted for corruption, came under public scrutiny in part because of the efforts of relatively liberal Republican Tim Day. But in a city like DC, where the GOP brand is just utterly toxic, even a black, gay, liberal Republican who helps oust corrupt Democrats like Thomas didn’t stand much of a chance against the other contenders for Thomas’ seat in Tuesday’s special election:

With all 18 precincts reporting at 9:30 p.m., [Kenyan] McDuffie took 44.50 percent of the vote. Second-place finisher Delano Hunter only mustered 20 percent, while Frank Wilds took 14.8 percent. Republican contender Tim Day, the man responsible for the investigation that eventually brought down Thomas, only managed 5.3 percent of the vote.

McDuffie wasn’t a bad candidate by any means, but Day’s poor showing speaks to an ongoing structural problem caused by the city’s lack of congressional representation. DC’s local shenanigans occasionally prompt critics to argue that the city doesn’t deserve representation in Congress, despite having a larger population than Wyoming, which has two Senators and a congressional representative. This gets things exactly backwards: The lack of congressional representation places a ceiling on political ambitions that reduces the incentive for local politicians to behave. DC’s best politicians don’t have a governorship, House or Senate seat to look forward to. It’s a political cul-de-sac. As Jonathan Bernstein pointed out Tuesday night, DC’s lack of representation also means Republicans have little reason to invest in a stronger local party whose partisanship might also serve as a check on local corruption. There’s also the weirdness of having national parties contest local elections, which makes little sense in the context of local DC politics and burdens candidates like Day who don’t have much in common with, say, Senator Jim DeMint (R-S.C.).

Retrocession into Maryland would solve some of these problems, but as a DC partisan I favor the city’s right to exist as an independent entity. Unfortunately, given that DC statehood would mean two new Democratic Senators, the constitutional changes necessary for statehood aren’t ever likely to happen, despite the fact that the United States was founded to combat the injustice of taxation without representation.