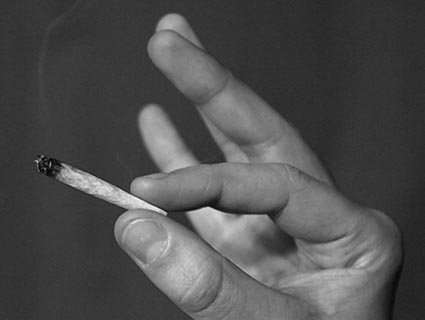 Though the web headlines have been altered since, several news organizations (including Mother Jones) led their stories on Thursday’s evidence dump in the Trayvon Martin shooting case with the revelation that Martin had small amounts of THC in his system.

This in itself is not all that surprising—Martin was suspended from school for possession of marijuana shortly before he was killed. The decision to lead with that information, however, suggests that it’s somehow material to the guilt or innocence of George Zimmerman, and I’m puzzled as to why anyone would think that’s the case. Here’s National Review‘s Andrew McCarthy, who in response to a report from ABC seems to regard the news as fully exonerating Zimmerman:

The report neglects to mention that in the 911 tape, George Zimmerman reported to the police dispatcher that Martin seemed suspicious to him because it seemed Martin was “on drugs or something.”

The report doesn’t say Martin was high at the time, or how that would have justified the use of lethal force by Zimmerman, but McCarthy seems to believe the case is closed. McCarthy’s reaction is indicative of the conversation surrounding the Martin killing, which has at times seemed less about the facts of the case and more about whether Martin was the type of scary black person Zimmerman would have been justified in fearing. There’s a discomfiting parallel here with rape cases, where too often the facts are subsumed in a debate about whether the victim had it coming.

That Martin’s exposure to marjiuana should be central to this argument, however, seems particularly absurd. The last three presidents of the United States have all but admitted to smoking marijuana, with George W. Bush demurring on the basis that admitting he had done so might set a bad example for children. This is not a drug that turns people into the Incredible Hulk.

Conservatives might respond that Zimmerman’s personality is equally on trial, given that many liberals believe he racially profiled Martin prior to their confrontation. Zimmerman, however, is still alive to defend himself, both in a Florida court and in the court of public opinion. Martin is not.